The popular Volkswagen California camper van has been updated, but have the changes made a difference? 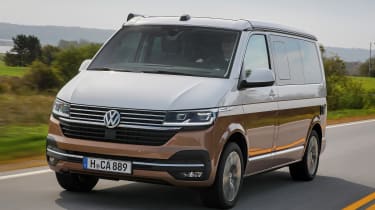 Once again, Volkswagen shows the rest of the industry – and the countless aftermarket converters – exactly how it’s done. The California is expertly engineered, with limitless clever tricks designed to make living on the road as easy and comfortable as possible. The tech upgrades only add to the van’s appeal, but be sure you want or need all the extra kit; at almost £70,000 before options, it’s an expensive buy.

The Volkswagen California is the quintessential compact camper. Many have come, others have gone, but the California, evolved from the fifties original, continues to win hearts across the globe.

Like the rest of VW’s T6.1 range – including the Transporter van and Caravelle luxury MPV – the California was recently treated to a mid-life nip and tuck, heralding a fresh look and ever more convenience features. Not due in the UK until next spring, we’ve been granted early access to the revised camper to see if the updated van is worthy of your consideration.

From the outside, the changes are mild. There are some new headlights and a slimmer grille at the front, some new wheel designs to the side, and fresh tail-lights at the rear. The white over bronze two-tone paint is new, too. 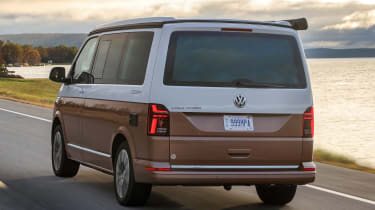 It’s inside where the biggest updates take place, taking the California – and the rest of VW’s mid-size van range – from commercial vehicle to luxury-laden load lugger. The dashboard is plastered with VW’s latest tech, featuring a brand-new, super sharp 9.2-inch touchscreen and a set of crisp, customisable digital dials.

The pixelated control panel above the rear-view mirror has been replaced by another functional touchscreen, allowing users to open and close the roof and set the temperature for the auxiliary heating. It also features a new ‘inclinometer’, which ensures your camping pitch is completely level before bedding down for the night.

Elsewhere, there’s a new, more comfortable bed in the roof, revised catches for the cupboards, and new trim options – including a choice of wood floors. UK specs haven’t been confirmed, but it’s likely the entry-level Beach model will be dropped in favour of a better-equipped Coast model, which boasts the same kitchenette (sink, two-ring gas hob and fridge) as our flagship Ocean version. 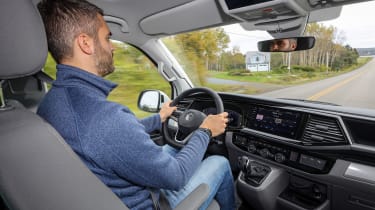 The California Coast gets a smaller screen and analogue dials, as well as a manually-operated roof. However, every version is expected to feature alloy wheels, automatic lights and wipers, all-round parking sensors, adaptive cruise, and the aforementioned auxiliary heater. The awning, which extends outwards from the right side of the van, is also standard.

Ocean models ramp things up, with three-zone air conditioning, heated seats and that electric roof. For the T6.1, VW is adding the digital cockpit dials, the bigger screen and LED lights, as well as a reversing camera, privacy glass and blind spot assist. You’ll need to decide whether you value these features, as the Ocean is expected to cost around £8k more than the Coast. That’s a lot, especially when you consider the Ocean costs roughly £6,000 more than before.

All versions now use Volkswagen’s tried and tested seven-speed DSG gearbox – there is no manual option. The Coast is available only with the 148bhp 2.0-litre TDI engine, while the Ocean heralds a higher-power 196bhp motor, as well as optional 4MOTION all-wheel drive. We tried the front-wheel drive model mated to the punchier engine, which demonstrated plenty of shove for what is ostensibly a 2.6-tonne van with windows. 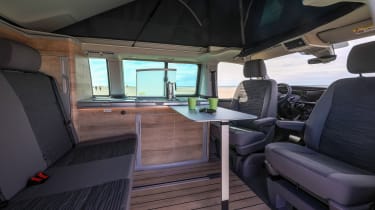 The gearbox appears smoother than before, and the engine is suitably refined. There’s a little wind whistle from around the door mirrors at higher speeds, but you’ll be amazed how quiet it is for such a large vehicle. VW claims to have tweaked the steering, but the changes feel minor and difficult to detect on the move. It still pays to take things gently if you don’t want your pots and pans rattling around in the rear.

But find yourself a secluded spot and no aftermarket camper conversion can compare with the latest California. It is a remarkably clever van, ingeniously engineered with myriad crafty features designed to make life on the road as painless as possible.

Space inside is generous with the roof raised, and you’ll never tire of the endless clips, covers and cupboards dotted around the cabin; unless you really need the added practicality of the Grand California’s toilet and built-in shower, the standard van will leave you wanting for very little indeed.