Anyone familiar with VW's city car will feel at home behind the wheel of this new Volkswagen e-up! electric car 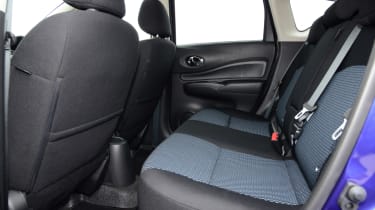 Volkswagen was a little late to the electric car market, but it has bold ambitions to top the zero-emissions sales charts by 2018. With a large percentage of its vast £6billion annual research and development budget going towards the creation of hybrids and full EVs, you wouldn’t bet against it happening – and the Volkswagen e-up! was the first chapter in this bold plan.

With a range of 99 miles on a full charge, the e-up! is ideal for those living in the city. It retains all the driving dynamics of the standard car but is actually faster to 62mph thanks to the instant hit of torque from the 81bhp electric motor. 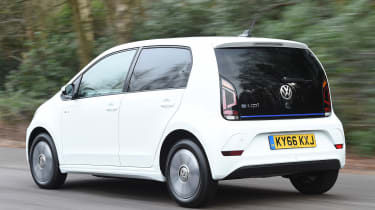 It even looks exactly like the normal VW up!, apart from some aero-optimised alloy wheels and a pair of subtle VW badges framed in blue. It was facelifted in 2017 with a few minor changes.

The Volkswagen e-up is a great little electric car with all the best parts of the up city car it's based on - just without the petrol engine. That means it won't cost much to run, and makes sense for those who can charge it at home and at work.

However, there's little reason to buy one, simply because it's extortionately expensive and has a frustratingly short range. The 99-mile all-electric range is competitive, but not class-leading. The high price prevents a recommendation, but get a bargain deal on one and you won't be disappointed.

The VW e-up is nearly as fun to drive as the normal car, with zippy in-town performance

You're unlikely to notice the fact that the e-up! is over 200kg heavier than a petrol version. All the weight of the heavy batteries is beneath the floorpan and between the axles, so the e-up! has the same precise turn-in and excellent body control as conventional versions.

The steering is sharper and feedback is more natural than in the Renault ZOE. In fact, the e-up!’s agility highlights the slightly wooden responses of the Renault. It’s also a lot quicker.

With 81bhp and 210Nm of torque, the VW’s electric motor is just 6bhp and 10Nm shy of the Renault’s, but the smaller up! is 254kg lighter, and it shows. All its torque is available from a standstill, so the e-up! sprints from 0-60mph in just 12.4 seconds - and it feels amusingly nippy around town. Plus, an 80mph top speed means there’s more than enough urge outside the city as well.

The little VW also rides very well, while the near-silent progress is very satisfying, with only minimal road noise and the gentle whir of the electric motor to disturb you.

There are no fewer than five levels of regenerative braking (D, D1, D2, D3 and B), too. In D, the car coasts when you lift the throttle, and the other levels provide progressively greater amounts of regenerative braking. In the last three, the brake lights automatically come on as you lift off. After a while, you learn to adapt your driving style to the more extreme modes and rarely need the brakes.

No conventional engine means the e-up costs buttons to run

Once you’ve accepted the high purchase price, the e-up! doesn’t cost a lot to run. There’s no battery rental to budget for and with no tax or fuel bills, it’s just a case of calculating and optimising your electricity charging costs.

Fixed-price servicing of £249 for three years or 30,000 miles isn’t bad value, either. The biggest concern for private buyers will be the uncertainty over second-hand values – our experts predict the e-up! will depreciate heavily, and retain just 31.7 per cent of its price over three years. 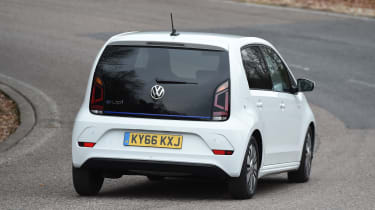 It's not a standalone EV model like the Renault ZOE, but the new VW benefits from being based on a great-looking and desirable city car.

With its perfect wheel-at-each-corner proportions and taut lines, the up! looks good, while the black glass panel tailgate and prominent VW badges leave you in no doubt that this is a top-quality small car.

The e-up! stands out even more than the regular car, with distinctive C-shaped daytime running lights and unique aero-optimised 15-inch alloys. The upholstery is edged in blue, as is the leather steering wheel, gearlever and handbrake. As with any other up!, it’s hard to fault the cabin. 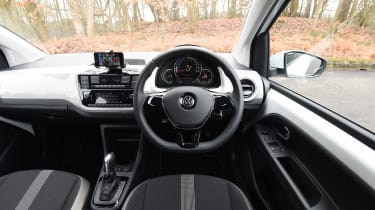 Build quality is unrivalled for a city car, while the simple dash is focused around the trio of dials and an excellent small display for the radio or media. The latest model does without a standalone scren, though, instead using your smartphone to control sat-nav and other functions via an official app.

All of the switchgear is superb and material quality is better than the ZOE’s. Plus, despite the futuristic drivetrain, the controls are refreshingly straightforward.

This means that anyone familiar with a standard petrol-powered up! will feel right at home behind the wheel. However, the most tech-savvy buyers may well find this approach a little conservative.

It's small, but there's a surprising amount of space inside

A tailored battery pack mounted in the floorpan and under the rear seats means the e-up!’s 251-litre boot is unchanged from the standard model’s. Tumble the split/fold rear seats and you get a 959-litre space, plus there’s enough room for two adults to travel in the back. Every e-up! is a five-door model, so access to the rear is good, but it’s strictly a four-seater. 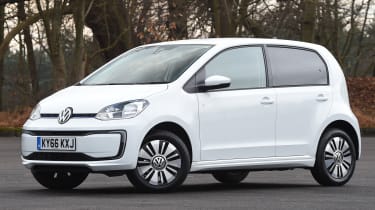 Cabin storage is good for a small car, though, and it’s impressive that the electric up! doesn’t demand any packaging compromises over the standard car.

In fact, as with all EVs, the biggest practicality consideration is working out whether your motoring needs fit within its range and charging parameters.

Volkswagen claims the e-up! will cover between 70 and 99 miles on a full charge, depending on your driving style and use of electrical kit such as the heater. From a domestic 230v socket, a full charge will take less than nine hours, but if you’ve got the use of a garage or driveway, the optional domestic wall box will reduce the charge time to six hours.

The up! also has a seven-pin charger for public fast charging points. With a 40kW DC supply, this will give you an 80 per cent charge in 30 minutes.

We have few reliability concerns over the e-up!, despite the fact that it’s VW’s first full production EV. The maker has invested heavily in battery and electric motor tech. All electric components and the battery are covered by an eight-year/100,000-mile warranty, while the rest of the car gets a three-year/60,000-mile deal. There’s also the option to increase this to four years and 75,000 miles for £205 or five years and 90,000 miles for £495. 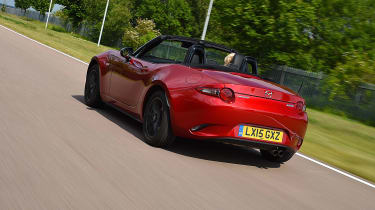 The standard up! has a five-star crash test rating from Euro NCAP and the e-up! comes with City Emergency Braking as standard. 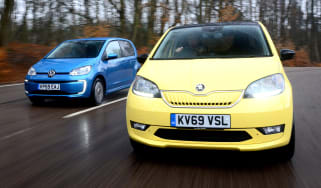 Skoda is returning to the city car class with the new all-electric Citigo-e. Is it a better buy than the similar Volkswagen e-up!?
New 2020 Volkswagen e-up!: UK prices and specs 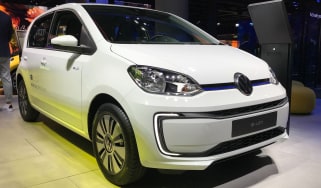 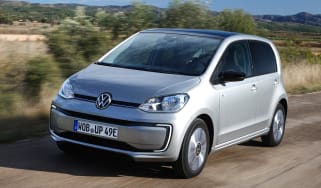 The new e-up! will be the cheapest all-electric car from Volkswagen, but is it any good?
Advertisement
VW’s cheapest electric car could still cost £16,000 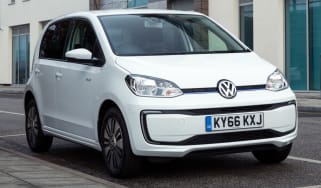 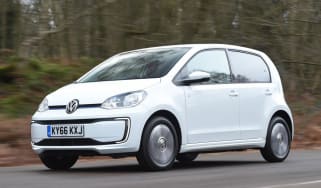 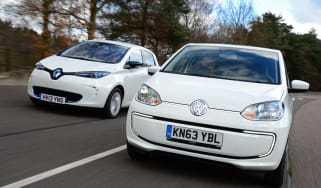 New e-up! is VW’s first full production electric car. We test it against Renault’s ZOE to see which EV cleans up
Skip to HeaderSkip to Content