New e-up! is VW’s first full production electric car. We test it against Renault’s ZOE to see which EV cleans up 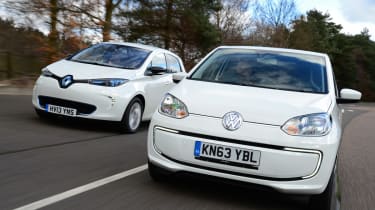 Small electric cars aren’t charging out of dealers yet. But the first all-electric VW – the new e-up! – is now on sale in the UK, and a zero-emission version of one of the world’s best city cars could be what finally takes small EVs into the mainstream.

The battery-powered up! costs £19,250 after the Government’s £5,000 plug-in grant and gets luxuries like heated seats, cruise control, DAB radio and sat-nav. Its electric motor produces 81bhp and 210Nm of torque while, depending on the conditions, VW promises a range between 50 miles and 90 miles. But the Renault ZOE is cheaper than the e-up! and offers similar power, range and charge times. We’ve put them head-to-head to see which is better. 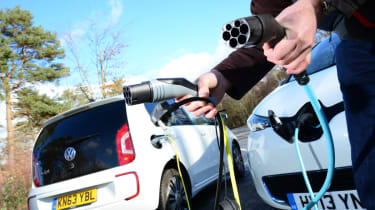 The e-up! and BMW i3 are the first cars to come with a CCS combi charger set-up, which provides both a seven-point CCS-style charge plug and a conventional UK three-pin socket.

The ZOE gets only the seven-pin version, so can’t be charged using a normal domestic plug. However, its Chameleon charger system works with single or three-phase power, and Renault will fit a charging station at your home for free.

Buyers can order their e-up! from one of 24 specialist dealers across the UK, while Renault will sell you a ZOE from all of its 248 retailers. Since the ZOE went on sale last year, the company has sold just 390 examples here. 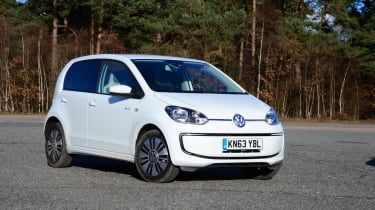 As with all electric cars, the e-up! will be held back by its limited range and high price. But if you’re in the market for an EV, this new VW is one of the best. It’s as good to drive as the petrol up!, plus is faster, more desirable and has a higher-quality feel than the ZOE. 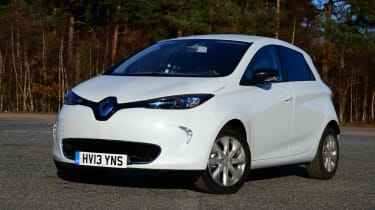 The ZOE is cheaper to buy than the up!, but battery rental charges reduce the price advantage. And while it offers a similar range, and has more cabin space, quality isn’t up to the VW’s standard, plus the ZOE doesn’t handle with the same verve. It’s slower, too.