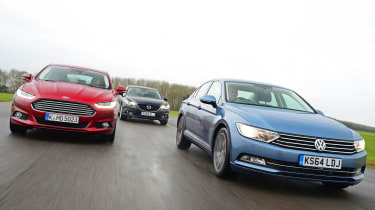 In recent years, buyers have been turning their backs on the large family car class and moving upmarket to the compact executive sector. But now, it’s time for the family fightback, as new models are being launched with greater premium appeal, better performance and lower emissions than ever before.

The latest arrival to the class is the eighth-generation Volkswagen Passat saloon, which promises a best-ever mix of upmarket quality, low running costs and involving driving dynamics.

For its first test, we’ve lined it up alongside another newcomer in the shape of the Ford Mondeo. It’s had a long gestation period, but the Estate model didn’t fare well in its first test. So, can the hatchback in Titanium spec make amends?

Both cars will need to be at the top of their game to beat our current class champ, the Mazda 6, though. While the switch from hatch to saloon body robbed the stylish Mazda of some of its practicality, there’s no doubt that it’s a fine performer, both in terms of emissions and driving involvement.

So, does the Passat have what it takes to win on its debut, can the Mondeo compete in hatchback guise, or will the 6 keep the newcomers at bay and retain its family car crown?

Follow the links above to read full reviews of each car, and scroll down to see which family favourite comes out on top... 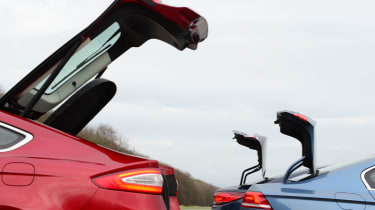 All three cars have long load areas that are hard to reach the back of, but the Ford’s hatch tailgate means it’s the easiest to access here, even though it’s a stretch to close the high-opening rear door. The Mondeo offers a 550-litre capacity, although the VW betters that with 586 litres.

The Passat and 6 have levers to release the rear seatbacks. While the VW’s fold flat automatically, the Mazda features a flat floor. 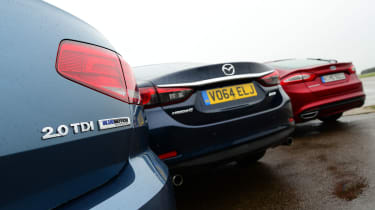 As the 6 has a lower list price and emits 104g/km, higher-rate earners choosing it will pay £80 a year less in tax than for its rivals.

The Mondeo doesn’t fare well, although business users should check out the ECOnetic model. It emits 107g/km, so is closer to the VW and Mazda for tax costs. 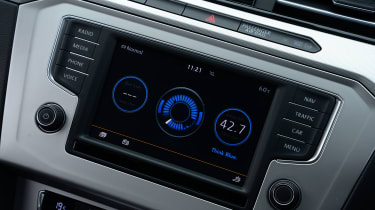 The Mondeo offers the £2,000 optional Titanium X pack, plus the Winter Pack (£300), which adds a heated steering wheel and seats. 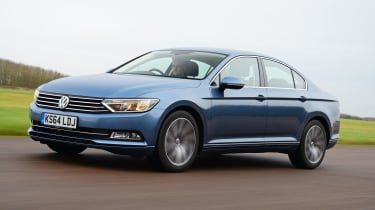 The Passat moves straight to the top of the family car class thanks to its winning combination of comfort, fine handling, a high-quality interior and excellent running costs. It’s also well equipped and can be specified with a range of options that only enhance the car’s appeal. While the saloon body isn’t the most versatile, it makes up for it with plenty of space for passengers and luggage. 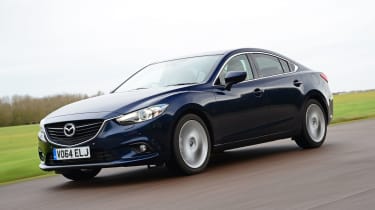 If you want a family car that’s fun to drive, then the Mazda 6 is still the model of choice. The boot is smaller than its rivals’, but it’s still vast and will suit most needs. The biggest letdown is the dated dash, although it will be addressed in the car’s forthcoming facelift. When that arrives, we have a feeling that the Passat won’t have its own way at the top of the class. 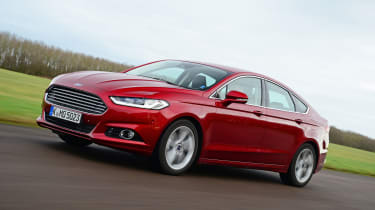 We were underwhelmed by the Mondeo when we first tried it, and the launch of the Passat has only compounded the Ford’s shortcomings. The new multimedia system and smarter cabin layout are a big upgrade from the old model, but it’s not a patch on the Passat for quality, while it’s also lost the driver appeal that made the old car a front runner in the class.