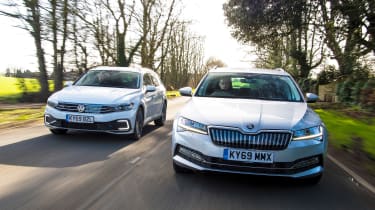 After years of hearing news about a forthcoming Skoda Superb plug-in hybrid, the Czech brand has finally brought the car to market – and it’s about time, as an increasing number of buyers start to make the switch to electrified cars.

In 2020 even more motorists will swap their petrol or diesel car for a plug-in hybrid (PHEV) like this new Superb iV, but this newcomer isn’t the only such car. Sister brand Volkswagen also makes a large plug-in family car: the Passat GTE.

Both of these models combine a small petrol engine with an electric motor, plus a battery that can be topped up from any electric car-charging point (or at home) to let owners drive on electric power only. 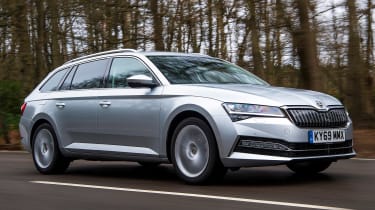 For: Massively practical, quiet and efficient powertrain, very comfortable rideAgainst: Expensive next to conventional versions of the Superb, could be more fun to drive

The Skoda Superb is based on the VW Group’s MQB platform, so it shares parts with many other models including the Passat – and both cars here feature the same set-up: a 1.4-litre petrol engine, an electric motor and a battery.

The Skoda uses MacPherson struts at the front and a multi-link rear, and Dynamic Chassis Control (DCC) is standard on all iV models, which is excellent. These adaptive dampers can be set to Comfort, Normal or Sport, softening or firming up the ride in the corresponding modes. It makes a significant difference, tightening body control in Sport mode and softening it out in Comfort. 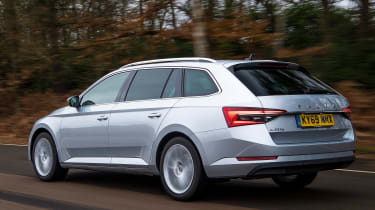 It’s integrated into a neat cabin that has a plain, inoffensive look, just like its Volkswagen rival here. Both use good-quality materials in certain places, but have harder plastics in other areas.

The Superb rides smoothly, and its suspension keeps body movements in check while still preventing sharper bumps from thumping into the cabin. This also means the interior stays calm, with no rattles – again just like in the Passat.

Both cars could do with more driver appeal, though. The Superb’s iV name doesn’t suggest it’s sporty, like the GTE’s does, but there’s very little feedback through the steering wheel. The Skoda is agile enough to be enjoyable to drive, but the added weight of the batteries means this version of the car isn’t as sharp as a normal model.

The Superb is slightly softer in all its driving modes than the Passat, yet its body control isn’t quite as effective. In Sport mode it’s good enough, but in Comfort the Superb iV’s high 1,677kg kerbweight is very apparent as the body lurches around when making faster steering inputs.

However, as an everyday car, the Superb performs very well. In its softest mode, it deals with big bumps in the road very smoothly, and the steering is precise enough to mean it’s satisfying to drive.

In our tests we found very little difference between the two cars’ performance, which wasn’t unexpected given they share a powertrain.

The Skoda took 7.1 seconds to go from 0-60mph, while the Passat took 7.0 seconds; this is a tiny difference and imperceptible without a timer. It means both are surprisingly quick for their size, which also adds to the driving experience.

• Infotainment: Android Auto and Apple CarPlay are both standard in the Skoda, and they work very well on the responsive, glossy screen. The system loads up quickly, too.• Steering wheel: Our car was fitted with a heated steering wheel, but this is a £240 option that also includes shift paddles.• Materials: Plastics inside the Skoda are mostly good but it also has some cheap-looking ones in places, just like the VW. 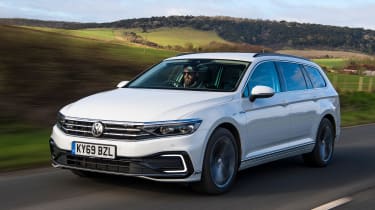 The Passat and Superb plug-in hybrids are extremely similar from behind the wheel – and it’s no wonder, because they both use the same MQB platform, as well as the same engine and electric motor. There are some differences, but the fact that the basic components are identical means there’s not much to separate the two when it comes to the driving experience.

So just as in the Skoda, the VW’s powertrain means you can run in electric-only mode, resulting in a very relaxed drive at low speeds around town.

Then when the petrol engine does start up – almost seamlessly – it’s still quiet and calm, and acceleration is smooth because the electric motor can fill in any gaps in the engine’s torque delivery. The Passat is punchy as a result, if not quite as sporty as the GTE name might suggest. 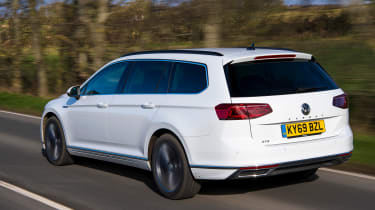 It’s the same story when it comes to the chassis set-up, because it’s much more relaxed than you might think given the badge. The steering is precise enough and there’s plenty of grip, but the GTE isn’t any sharper to drive than a normal Passat. It’s satisfying enough, but isn’t the most engaging car; the extra weight of the heavy battery pack erodes the regular Passat’s qualities on both fronts.

Performance was okay at our test track and the GTE matched the iV where it counts. Both cars went from 30-50mph in fourth gear in 4.1 seconds, and from 30-70mph through the gears in 5.8 seconds. In all of our other tests, including 0-60mph and 50-70mph, the GTE was within 0.1 seconds of the iV, so they’re essentially the same for performance.

The VW’s suspension delivers a smooth ride, and the two competitors here are pretty evenly matched for comfort. On Passats with larger wheels the ride starts to get a bit choppy, especially over potholes at lower speeds, but on the basic GTE you get a set of 17-inch alloys with enough tyre sidewall to absorb the worst of the bumps.

Our test car was fitted with adaptive dampers, but with them in their softest setting the VW is still not as comfy as the Skoda. Big potholes thud into the cabin, yet the Superb can keep them at bay.

Interior build and material quality are very good in the Passat, just as they are in the Superb; likewise, the design of the cabin is plain and subtle. It’s either dull or classy depending on how you look at it, but it’s not likely to upset anyone.

Standard kit on the GTE model includes an eight-inch touchscreen infotainment system with sat-nav and online services, heated leather seats, adaptive cruise control, and electric charging cables for a wallbox and three-pin plug, as on the Skoda.

• Infotainment: The in-car set-up could do with more physical buttons, but it’s possible to do the most common tasks using the buttons on the steering wheel.• Storage: There are cupholders behind the gear lever and a small phone holder in front, plus a cubby between the seats.• Seats: Heated leather seats come as standard and are comfortable to sit in, but the VW’s driving position could be better. 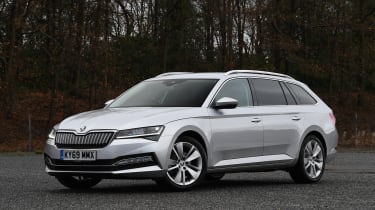 The Superb iV is incredibly similar to the Passat GTE in a lot of ways; it has the same powertrain, and this brings many of the same benefits. Yet the Skoda is better equipped and cheaper to buy than its Volkswagen rival. It’s still expensive, but company car buyers will love it. 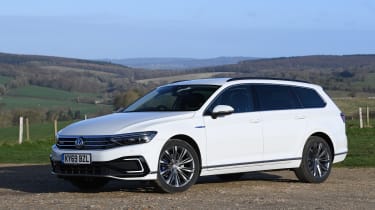 The Passat has almost all of the same good points as its rival: it’s quiet, good to drive, and has all the kit you’d want, plus a smooth hybrid powertrain with the potential for very low running costs. However, it’s not quite as comfy as its rival and is more expensive, so it’s second here.