The Volkswagen Passat GTE plug-in hybrid is fast and efficient, but it comes at a price 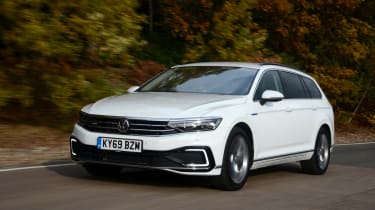 Diesel isn’t dead, but Volkswagen more than anyone knows that it could be on borrowed time. Which is why it is putting serious weight behind electrification of its key models, such as this: the Passat GTE.

Volkswagen has extensive plans for its electrified future and the Passat GTE – introduced in 2015 and refreshed for 2019 – sits as the plug-in hybrid executive car that’s aimed largely at fleet users. Low CO2 emissions, useable all-electric range and reasonable economy figures are par for the course in this class.

The 2019 update was applied across the Passat range, adding new bumpers, tail-lights and badging, although the GTE gets unique C-shaped running lights to set it apart visually as an electrified Volkswagen. 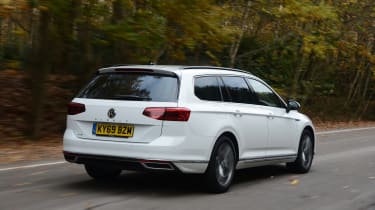 Under the skin there’s largely the same powertrain as before, albeit with a larger 9.9kWh battery. A claimed all-electric range of 34 miles is the result, although real-world range is likely to be a little less impressive.

On paper at least, the Passat GTE will sprint to 62mph in just 7.4 seconds (7.6 for the estate), before hitting a top speed just shy of 140mph. Up to 34 miles can be driven using pure electric power, contributing to claimed economy of 180.9 to 217mpg depending on body style – although these figures rely on a fully charged battery and a light right foot.

Two trim levels are available: the standard Passat GTE and the more expensive GTE Advance, both of which are available in saloon and estate body styles. A specially developed six-speed DSG transmission is standard, featuring a third clutch which decouples the TSI engine when possible to improve economy.

The GTE is distinguished by C-shape LED daytime running lights, a blue line across the radiator, a redesigned front bumper and 18-inch alloy wheels.

It occupies a neat space in the compact executive segment, falling somewhere between premium rivals such as the Audi A4, BMW 3 Series and Mercedes-Benz C-Class, but above the likes of the Ford Mondeo, Vauxhall Insignia and Skoda Octavia.

The Passat GTE delivers an impressive blend of performance, refinement and efficiency without the looming shadow of a diesel engine. The petrol-electric powertrain seamlessly switches between driving modes and offers up to 34 miles of pure-electric driving. It’s slightly less practical than the more conventional models and the high price means that you’ll need to do some sums in order to justify the cost. But that aside, the GTE remains deeply impressive, even if you should take the official economy claims with a pinch of salt.

Feels at its best in GTE mode, but some handling poise has been lost

The GTE drives, to all intents and purposes, like a regular Passat, but there are a few notable differences. To get the best from it, you should charge it overnight, which allows the car to start in pure electric E-mode.

With all the usual caveats about EV range, you should have enough juice to drive 34 miles on electric power at speeds of up to 87mph. In reality this should be enough for the majority of daily commutes, although the Passat is likely to spend more time on the motorway.

Press the button marked GTE and the petrol engine and electric motor work in harmony to deliver the combined force of 215bhp to unlock that hot hatch-taming 0-62mph time. The steering weights up and the DSG transmission holds on to a lower gear for longer, to deliver a more responsive drive. 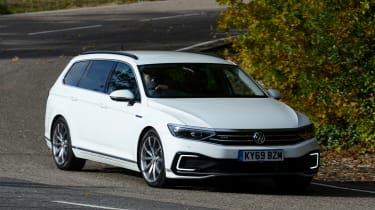 It’s not exactly sporty – the additional weight over the diesel automatic sees to that – but it’s certainly brisk. Be warned: too much GTE time will only serve to decrease the fuel economy, so is best used sparingly.

Stick the Passat GTE in Hybrid mode and it’ll choose the best mode for the circumstances, while electric power can be conserved by selecting Battery Charge mode. This is useful if you’re approaching a city centre or are hoping to make a quiet late-night arrival at the in-laws’ house.

For the most part, the Passat GTE feels remarkably refined, with none of the harshness and vibration associated with a diesel engine. It seamlessly switches between petrol and electric modes, while the transmission is smooth and relaxed.

Complaints? Well, the additional weight only serves to make the Passat feel less agile through bends, while it can occasionally crash and thud on imperfect roads, especially at low speeds. But on a motorway, the GTE is smooth, refined and wonderfully hushed.

The powertrain in the Passat GTE is a combination of Volkswagen’s familiar 1.4-litre TSI petrol engine and an electric motor. Combined, they deliver 215bhp and 400Nm of torque.

The GTE saloon can sprint to 62mph in 7.4 seconds while the estate manages it in 7.6 seconds.

Claimed figures are ambitious, but 31 miles of pure-electric driving is a bonus

This should be an area in which the Passat GTE excels, but in reality you’re unlikely to get anywhere near the claimed 180.8 to 217.9mpg. On a mixed journey incorporating motorways and A-roads we’d expect a figure somewhere in the mid-forties; keep the batteries charged and in low-speed traffic you could well see three-figure returns.

You could, in theory, do the daily commute with zero-emissions, only using petrol power at weekends on longer trips.

By emitting just 39g/km of CO2, the Passat GTE is exempt from the London Congestion Charge and will be highly attractive to fleet buyers. First-year VED comes is free too, followed by yearly payments of £135 if you haven’t pushed the car’s list price over the £40,000 threshold for the government’s surcharge.

A full charge will take around five hours using a standard domestic socket or three hours and 50 minutes using a dedicated 3.6kW supply. Two charging cables are included – mode 3 for wallboxes and chargers, plus a mode 2 cable for charging from a mains plug. 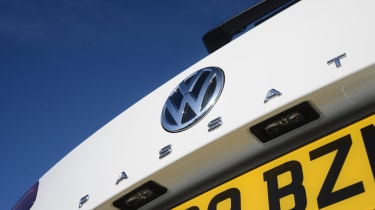 A group 26 insurance rating for the GTE and group 28 for the GTE Advance model make this one of the most expensive options in the Passat range from an insurance point of view. The GTE shares the same groups as the most powerful internal combustion offerings in the range.

As the backlash against diesel gathers pace, interest in plug-in hybrid cars will only increase, which could improve residual values. That said, the Passat GTE is extremely expensive to buy new and it’s unlikely to retain as much value as, say, a BMW 330e.

Cool and sophisticated styling upgrades with a premium-feel interior

The Volkswagen Passat’s restrained, lightly updated styling will age well and the GTE is arguably the best looking of the entire range. The subtle hints of blue add a level of coolness and sophistication, which is a welcome antidote to the aggressive R-Line.

Subtle GTE badges act like some kind of reference point to a thoroughly modern take on the GTI recipe, while the C-shaped LED daytime running lights, blue strip above the grille and 18-inch alloy wheels complete the effect. The charging-point inlet is situated on the radiator grille.

The interior is similarly restrained and understated, but remains one of the Passat’s key selling points. The fit and finish is tantalisingly close to the premium players in this sector, while the ergonomics are first-rate. 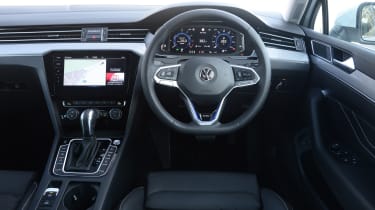 The GTE is lifted above the regular models by the blue ambient lighting, a leather steering wheel with blue stitching, a GTE-branded gear knob and, three-zone climate control and leather seats. It feels premium – but then, it should, at upwards of £37,000.

Battery pack robs the Passat of luggage space and headroom

Two body styles are available, but in both cases the GTE is less practical than the non-electrified versions. The battery is located in the floor area beneath the rear seats, which robs the Passat of 41mm of headroom (993mm in the saloon and 990 in the estate).

But that doesn’t detract from what is an extremely spacious and comfortable car. The driving position is better than ever and the seats are wonderfully supportive, especially on long journeys.

As previously mentioned, the battery pack robs the GTE of some headroom, but the amount of space remains impressive. It’s not as cavernous as a Skoda Superb, but rear legroom is generous and access to the front and rear is easy. The wide transmission tunnel means that the centre rear seat is best reserved for occasional use and smaller passengers. 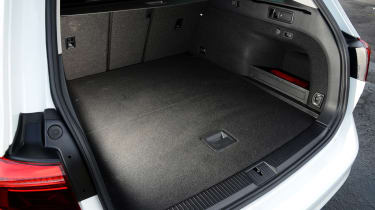 Thanks to the battery pack, some underfloor boot storage has been lost. The saloon drops from 586 to 402 litres, while the estate is down from 650 to 483 litres. Not exactly small, then, but significant if you’re buying the Passat for its boot capacity.

Without the additional storage, there’s no room for a spare wheel, so run-flat tyres are fitted to the GTE.

With the rear seats in the upright position, there’s actually very little to choose between the two body styles. However, with the rear seats folded, the estate provides 1,613 litres of space, far more than the 968 litres in the saloon.

It’s one of the reasons why we’d choose the estate over the saloon, even taking into account the £1,500 premium.

Meanwhile, Volkswagen itself finished 17th out of 30 cars on the list of the best manufacturers. While these aren’t the worst results, there’s definitely room for improvement.

Safety is less of a concern, with the Passat awarded a maximum five-star Euro NCAP rating in 2014, scoring 85 per cent for adult occupant safety, 87 per cent for child occupant, 66 per cent for pedestrian and 76 per cent for safety assist technologies.

As with all Passat models, the GTE comes as standard with adaptive cruise control, a driver alert system, hill-hold, front and rear parking sensors, traffic jam assist and automatic emergency braking. A range of pre-emptive systems help ready occupants for a collison too. 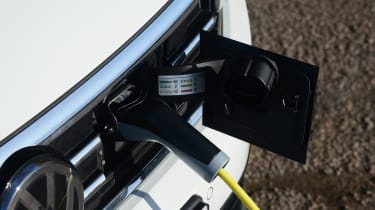 The Passat GTE is covered by Volkswagen’s three-year/60,000 mile warranty, which can be extended up to a maximum of 90,000 miles or five years.

While a three-year warranty is pretty standard in this sector, it’s worth noting that the Kia Optima plug-in hybrid is covered for seven years, while the Hyundai Ioniq is offered with a five-year warranty.

The Volkswagen Passat GTE is available with a choice of two service plans, with intervals dependent on how the car is likely to be driven and its general use. There are no difference between the hybrid model and the regular petrol and diesel versions.

The fixed service plan is designed for vehicles that will cover less than 10,000 miles a year and includes an oil change service at 10,000 miles or one year, whichever is soonest, and an inspection service after 20,000 miles or two years.

A flexible service plan is ideal for vehicles with a daily mileage of more than 25 miles and includes a flexible oil change service up to a maximum of two years. The inspection service is carried out after 20,000 miles or two years, whichever is soonest. 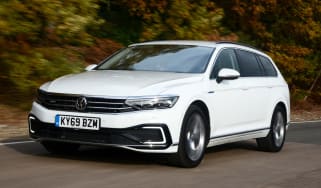 Is the plug-in hybrid Volkswagen Passat GTE Estate the company-car of choice? We find out...
Skip to HeaderSkip to Content