The new C2 VTS may be grabbing the pocket-rocket headlines, but don't ignore this - a hot version of the Volkswagen Polo. 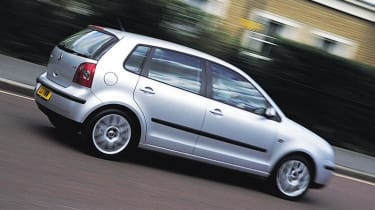 Take a test drive, and the Polo GT will leave a smile on your face - but get back to the showroom and glance at the price list and it will soon turn into a grimace. With a punchy 128bhp turbodiesel powerplant and sports suspension, the GT is good to drive, but rivals from Skoda and SEAT are better looking, come with traction control and are far cheaper.

The new C2 VTS may be grabbing the pocket-rocket headlines, but don't ignore this - a hot version of the Volkswagen Polo. Called the GT, it doesn't quite have the badge kudos of its Golf GTI big brother (which is due to go on sale in January), but can it live up to the legend out on the open road?

The first thing to realise is that this is no ordinary hot hatch. Under the bonnet, you will find VW's punchy 1.9-litre, 128bhp turbodiesel engine, which not only offers thump-in-the-back performance, thanks to an impressive 310Nm of torque, but also returns 55.4mpg.

While the official 0-62mph time of 9.3 seconds doesn't seem particularly impressive, in the real world the gutsy six-speed Polo feels far quicker than that figure suggests. The GT's sporty suspension set-up gives it decent handling too, with good body control and a comfortable ride over bumps.

So this Polo has the performance to earn its GT badge, but what about the styling? Apart from 16-inch alloy wheels and slightly lowered suspension, the new range-topping model looks virtually identical to all the other variants. Designers have placed plenty of GT badges inside and out, though.

And let's not forget that this isn't the first diesel hot hatch to be produced by the VW Group. Buyers also have the choice of Skoda's Fabia vRS and SEAT's Ibiza TDI FR - both use the same engine as the Polo GT while all three are based on the same platform.

For that price you get equipment such as climate control, a dashboard-mounted six-disc CD changer and a leather-trimmed steering wheel. However, you do without any form of traction control - something that is fitted as standard to both the Skoda and SEAT. If the C2 VTS sits at the top of the hot hatch value charts, the Polo GT is stuck firmly at the bottom.