Line up a classic Golf GTI MkI next to its modern successor, and there's one obvious difference - size. The latest version of VW's hot hatch has matched the thrills of the original like no other, but over the years, it's grown. 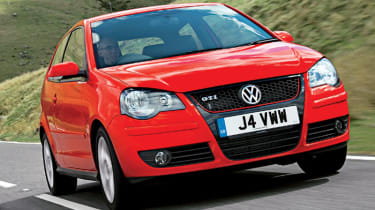 The Polo GTI is greater than the sum of its parts. Based on an uninspiring platform, and using VW's oldest high-performance engine, it doesn't pack the same punch as rivals. Yet somehow, it manages to be a thoroughly entertaining hot hatch. The Polo's compact dimensions give it a sharp and nimble feel and, if you can't afford a Golf GTI, the Polo equivalent is a capable understudy.

Line up a classic Golf GTI MkI next to its modern successor, and there's one obvious difference - size. The latest version of VW's hot hatch has matched the thrills of the original like no other, but over the years, it's grown.

Enter the latest performance Golf's little brother - the Polo GTI. Volkswagen doesn't hand out its hallowed three-letter tag without good reason, and the firm says it has moulded the Polo into a genuine thrill-seeker. Auto Express put it to the test in the UK to see if the conservative supermini has a wild side.

Inside, tartan trim on the seats is a classic GTI trait, while the driver gets a grippy, leather-trimmed wheel and upmarket dials. So the Polo has the style to tempt hot hatch buyers - but does it deliver the performance?

Unlike other recent additions to VW's sporting line-up, the Polo doesn't use the maker's latest powerplant. Instead, it has been fitted with the firm's ageing 1.8-litre turbo petrol engine.

That might not sound like a great idea, but the proven unit has much to offer. Developing 148bhp, its pace is well matched to the front-wheel-drive chassis. With 220Nm of torque arriving at 1,950rpm, it propels the supermini from 0-60mph in 8.2 seconds.

A five-speed manual gearbox is fitted as standard, and engineers have tried to give the quick, accurate shift a weighty feel. We only wish they had matched the heavier motion with a more substantial gearlever - the standard stick isn't particularly good to hold. The Polo chassis isn't renowned for its entertaining dynamics, but the suspension has been reworked and lowered by 15mm, with impressive results.

The nose is keen to turn into bends, while the chassis feels balanced if you lift off the accelerator in the middle of a corner. The Polo is agile, and the compact dimensions make it ideal for narrow country lanes - as is the case with its Golf MkI predecessor.

What the flagship Polo can't match, however, is the latest Golf GTI's breadth of abilities. While the larger hatchback is comfortable and composed, this car's stiff ride is much more compromised, crashing over bumpy surfaces.