The Polo GTi has power and style, but how does it compare to the Golf? 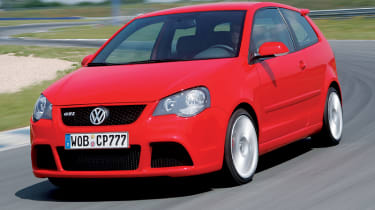 Extra power and styling tweaks make the feisty Polo GTI a truly fast hot hatch. Sadly, it lacks the finesse of its big brother Golf, with compromised ride and refinement, but it will still put a smile on your face. Compared to competitively priced rivals such as Renault’s Clio 197, it’s also short on punch and agility. If it comes here, it could prove too costly to take on fresher opponents.

Family rivalry can be healthy, but it also highlights weaknesses - which is exactly what happened when we tried the Volkswagen Polo GTI last year (Issue 911). The excellent Golf hot hatch is a tough act to follow for any car, but we couldn't help feeling disappointed by the brand's go-faster supermini.

The hot Polo isn't bad - it just lacks its bigger brother's sparkle. As a result, the German firm has come up with the Cup Edition. It's based on the cars from Europe's Polo Cup one-make race series - but does it give the little VW the leg-up it needs to really shine?

It certainly starts promisingly enough, with the familiar 1.8-litre turbocharged engine under the bonnet tuned to produce 177bhp. That's 29bhp more than both the standard GTI and the circuit racers that inspired the newcomer, and ensures the Cup is the most powerful production Polo of all-time.

Visual clues to the car's extra potential include a brash roof spoiler, 17-inch alloys and unique badging. Purposeful new front and rear bumpers also feature, and combine with deep side sills to provide the range-topping Polo with a lower, more aggressive look.

Climb aboard, though, and the differen­ces aren't quite so obvious. The sports seats, leather-rimmed steering wheel and upmarket instruments found in the standard Polo GTI have all been carried over; there's nothing to set the more powerful variant apart.

Turn the key and you will quickly spot the 29bhp. The standard model completes the benchmark sprint from 0-62mph in 8.2 seconds, but in the Cup Edition, that figure drops to a far sportier 7.5 seconds. Uprated brakes - complete with fashionable red calipers - help to bring the Polo to a halt more effectively, too.

Predictably, the new machine pulls strongly from any legal speed, but the trade-off for this comes on the motorway, where engine noise is noticeable. And that's not the only fly in the ointment; while the slick five-speed gearbox from the ordinary Polo GTI is retained, so is its suspension set-up.

The GTI's ride is already firm enough, but it's made worse by the Cup's bigger wheels, so the model still lacks the comfort and composure of the Golf. The suspen­sion crashes over uneven surfaces, and also struggles to cope with the engine's 235Nm of torque when it arrives with a rush at only 2,000rpm. What's more, it's easy to prompt a chirp of wheelspin when exiting tight bends, even though electronic stability control is included as standard.

Carry too much speed into a corner, and the unruly Cup will also push out wide too easily, but it still provides all the driver entertainment you'd expect from a junior hot hatch. What prevents this Polo seeing off the competition is a shortage of all-round polish.

Unsure exactly how the newcomer would fit into the line-up in this country, bosses at Volkswagen UK currently have no plans to bring it to main dealers here. But if enough willing buyers lobby their local showrooms, don't be surprised to see it make an appearance.