We go for a ride in the Volkswagen SEDRIC, VW’s self-driving taxi of the future

Vehicles such as the SEDRIC will soon be shuttling people around cities safely, quietly and efficiently, claims VW. There’s still work to do, but the idea and execution of what’s been done so far is compelling – if not to everyone’s taste.

Within the next five years the VW Group is aiming to have a fully autonomous Level 5 ‘mobility service’ on the market. It won’t be sold to everyday consumers, but instead to businesses such as taxi firms and delivery companies who want more efficient transport services.

The SEDRIC is a working concept of what the VW Group is planning to sell – and Auto Express has been for an exclusive passenger ride to see how the project is developing.

• The ultimate guide to autonomous cars

The car retains much of the look of the design concept that was previewed at last year’s Geneva Motor Show. Visually, the only real change is the removal of the wheel covers so the SEDRIC has the ability to turn corners. 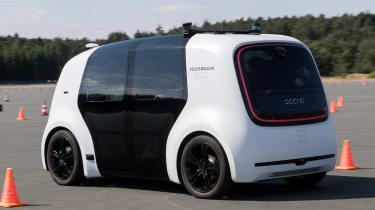 It’s cloaked in lidar (light and laser) sensors, 360-degree cameras and radars that enable it to tell the difference between, say, a dog and a pedestrian, as well as determining if there are any impending risks ahead.

The VW Group research team is still using the prototype for validation testing on these systems before handing it over to product development specialists for fine-tuning ahead of its launch.

So the mechanical make-up of this prototype is quite different to the car we’ll see in five years’ time. It’s based on an e-Golf, so it’s front-wheel drive and driven by one electric motor; the final model will be based on the VW Group’s new MEB platform and feature one electric motor on the rear axle.

SEDRIC is hailed via a smartphone app. When it pulls up it greets you using one of six external displays, which also allow it to communicate with other pedestrians. The doors slide open to reveal a light four-seat cabin. Despite having a similar wheelbase to the up! city car, it offers a vast amount of space.

Once the SEDRIC has the destination logged, a quick prod of a centrally located Go button closes the doors and sets the vehicle on its way. 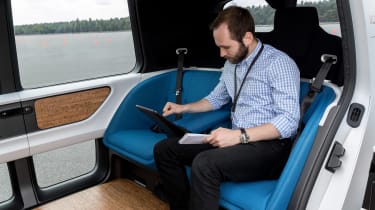 Acceleration is slow and smooth to help aid refinement. The SEDRIC negotiates a short 400m course with ease; it swerves left and right through cones, maintaining a smooth and controlled speed until it arrives at its destination. It’s all rather undramatic, in fact – and that’s largely the aim.

Inside, an enormous transparent screen sits behind rearward-facing passengers and displays information such as outside temperature, vehicle speed and distance to the destination.

VW also plans to allow passengers to project content from their smartphones, while the screen could also be used by companies for advertising space as an additional revenue stream.