A few upgrades make this car look nicer but it's relatively unchanged. But that's a good thing 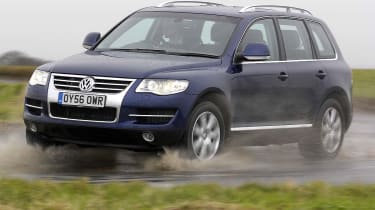 Despite the 2,300 new parts, this doesn’t feel like a major overhaul for the Touareg. However, that’s not to say it hasn’t been successful. The new Eos-style grille adds visual punch and the cabin is now even classier, while the driving experience continues to strike a fine on and off-road balance. Add the new safety features – particularly Front Scan – and the wide engine range, and you’ve got a competent and desirable SUV.

It's one of the best-loved badges in the business – a byword for dependability and quality. But there are areas of the car market where the famous VW roundel has struggled.

Take the luxury sector... and the Touareg. There’s no doubt the big 4x4 is well engineered with impressive ability on and off-road. But against BMW’s X5 and Mercedes’ M-Class, its lack of badge cachet has held back sales. In an attempt to boost popularity, the model has been heavily revised – but can this turn around its fortunes?

Of the 2,300 new parts, one stands out straight away – a new Eos-style chrome grille. Along with restyled lights and sleeker mirrors, it gives the Touareg much more road presence.

The rear isn’t quite so bold, though, as changes are limited to new lamps with twin circular lenses, a restyled bumper and revised chrome exhaust pipes. Inside, subtle differences include a new multifunction display plus reworked front seats and leather trim.

The biggest updates have taken place under the skin, and they’re all related to safety. In a first for an off-roader, there’s Front Scan, which uses sensors linked to the adaptive cruise control to bring the car to a stop if it senses an imminent collision.

This is backed up by new ABS, which cuts braking distances by 20 per cent on really slippery surfaces, and Side Scan, which alerts the driver to any vehicles in their blindspot.

In every other way, the Touareg is unchanged – and that’s no bad thing. Though there is still no seven-seat option and rivals offer more space, the cabin is brilliantly built with sturdy wood and classy chrome. The driving experience gets the thumbs-up, too. Despite its large size, the Touareg feels much smaller from behind the wheel, and is agile and fun on country roads. Plus, with permanent four-wheel drive, it always seems secure.

High-speed cruising is excellent - there is little road or wind noise, while the air-suspension soaks up bumps. The Touareg is also very capable off-road, thanks to the car’s ability to raise the body for maximum ground clearance, plus its standard low-ratio gearbox and locking differentials.

Our SE variant’s 306bhp 5.0-litre diesel V10 provided sports car performance. However, a combined fuel figure of 23mpg and 346g/km CO2 emissions mean it is not only the £54,770 price tag that will prove financially intimidating.

A better option is the 3.0-litre TDI SE, which costs £35,610 yet still has climate control, a 10-speaker CD player and alloys. But the crunch question is, do the changes transform the Touareg? Well, not really. It is still a fine off-roader, but with BMW’s new X5 on sale this year, there is no doubting which badge most SUV buyers will be putting their money behind.