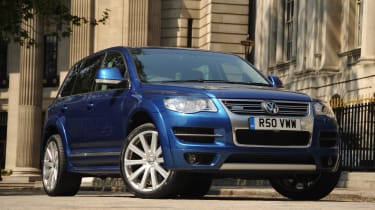 Incredible performance, beefed-up looks and a luxurious cabin make the R50 everything you would expect from a £62,000 SUV. If you want stump-pulling torque and look-at-me styling, thisTouareg is just the ticket. Its flashy looks are an acquired taste, though, and its sky-high price tag will have running costs to match, thanks to road tax in Band G and combined fuel economy of only 22.4mpg.

The Mondeo diesel is the sensible answer to rising fuel prices, but not all oil-burners display such miserly thirst – take the new Volkswagen Touareg flagship, for example.

The R50 has a V10 diesel which has been tuned to optimise performance rather than economy. The 5.0-litre unit produces 345bhp, up from 308bhp, and an incredible 850Nm of torque. All of this translates to an impressive 0-62mph sprint time of 6.7 seconds – that’s faster than the Golf R32 hot hatch!

Despite the power hike, VW claims that CO2 emissions and fuel economy are the same as with the regular V10, so buyers can expect 333g/km and 22.4mpg respectively.

A six-speed automatic gearbox is the only transmission available, while the suspension has been revised to cope with the extra power.

The R50 sits 20mm lower than the standard model, but it isn’t enough to eliminate the body roll that afflicts all off-roaders if you start to increase the pace in the bends.

When it comes to kerbside appeal, the R50 features a host of details designed to set it apart from lesser Touaregs. Enormous 21-inch alloy wheels are the most obvious addition, but the off-roader also looks wider, thanks to its body-coloured wheelarch extensions. Blue-painted brake calipers and a matt silver grille provide a distinctive look at the front, while there’s an all-new bumper and roof-mounted spoiler at the back.

Inside, there’s luxurious leather upholstery and R-logos on the polished steel pedals. The new flagship is an impressive piece of kit and sure to be exclusive, but as with the flagship Golf R32, the R50 isn’t the best model in the line-up.

Rival: Range Rover Sport The bodykitted TDV8 HST really looks the part, and it has more prestige than the R50, too. The British offering can’t compete in raw performance terms, but does manage to undercut its German rival by £3,000.