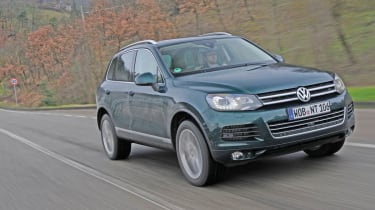 There wasn’t much wrong with the old Touareg – but this fresh version is still a huge leap forward. The restyle is a great success, creating a sleek and attractive vehicle with a luxurious interior. Thanks to a drastic weight-loss programme and new engines, the car offers improved fuel economy, emissions and performance. VW has paid realattention to the details, too: the cockpit feels intuitively laid out, there’s much more space inside and added features such as the Area View cameras are very welcome. All in all, the new Touareg is a capable and desirable premium SUV.

Leaner, meaner and greener... it’s the all-new Touareg! But Volkswagen’s popular SUV is still recognisable, despite a number of styling updates.

At the front it features the same family face as the Golf and Polo, with the addition of a U-shaped line of LEDs around the headlights. The model is bigger than before – 41mm longer and 12mm wider, with a wheelbase extended by 38mm – yet it seems smaller, more muscular and more focused.

Sharper lines and concave side panels help create a more agile look, as do the lower roof and the fact the body sits 12mm closer to the ground. VW has put the Touareg on a serious diet, too: thanks to the use of aluminium and a lighter powertrain, the SUV has shed more than 200kg.

The leather and wood interior is luxurious and comfortable, while the chrome and aluminium flourishes finish things off nicely. Redesigned seats make long-distance driving a breeze, and that extended wheelbase gives a real sense of space in the back – something the old model lacked.

The version we drove had an eye-catching seven-inch colour centre screen. However, this doesn’t come as standard on all variants – most get a smaller five-inch monochrome unit.

The menu system is intuitive and the attractive black console sits neatly in a hi-tech, logically laid-out cockpit. Kit also includes all-direction Area View cameras, which offer a 360-degree scan of the Touareg’s surroundings on the centre console, while the bird’s-eye view set-up is a bonus.

VW is keen to stress that it has added stop-start on all engines, as well as regenerative braking and a newly developed eight-speed automatic box. As a result, fuel consumption is improved by around 20 per cent. The base 236bhp 3.0-litre V6 diesel – the most economical variant – offers 38.1mpg. Other engine options comprise a 335bhp 4.2 V8 and a 375bhp 3.0 petrol hybrid (driven opposite), which promise 31mpg and 34.4mpg respectively.

We tried the V6 turbodiesel, and were impressed with its punchy and smooth performance. It covers 0-62mph in 7.8 seconds and reaches 135mph. The auto shifts faster than in the old model, and the lighter kerbweight and excellent handling mean the Touareg feels like a much smaller and more nimble vehicle. It is comfortable and refined, too.

Rival: Mercedes ML300 CDI Now that the new Touareg has headed upmarket, the M-Class is in its sights. The Merc certainly has class and quality, as well as amazing comfort and refinement. Latest BlueEFFICIENCY models such as the base 201bhp 3.0-litre diesel can return 33mpg and do 0-60mph in around eight seconds. At £40,165, the ML 300 CDI is more costly than the VW, though.