We review the 313mpg, two-seater Volkswagen XL1 in the UK for the first time 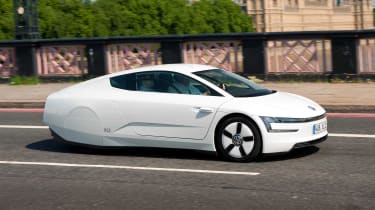 Volkswagen says that six people in the UK have committed to buy an XL1, whatever the price. And who knows what that will be – not even VW, it seems. All that has gone on record is Dr Piech saying it’ll be affordable. But for who? Whether VW builds the promised 250 or more, this car is more about the technology that will filter through to other models. Which makes this brilliant car’s achievements all the more important.

What have the Bugatti Veyron and Volkswagen XL1 got in common? They can both stop London traffic, as our drive in VW’s eco marvel proved. But they’re also the brainchild of VW boss Dr Ferdinand Piech who wanted to prove his group’s capabilities at opposite ends of the spectrum.

As well as the pinnacle of performance that is the Veyron, Piech dreamt of a production car that could travel 100km (62miles) on just a single liter of fuel – economy equivalent to 313mpg. Following concepts in 2002 and 2009, this is the production car that goes on sale this year. And we’ve driven it for the first time in the UK.

This is a technological tour-de-force that looks and feels like nothing else on the road. Tucked neatly away behind the two seats (one slightly behind the other so width could be kept to a minimum and shoulders wouldn’t clash) is a tiny two-cylinder 47bhp turbodiesel engine with a 27bhp electric motor bolted onto it, which, in turn, has a specially adapted DSG gearbox attached. Behind that is a boot big enough for a decent-sized suitcase. Also hidden away is a battery pack, which can be topped up in a little over an hour via a plug. 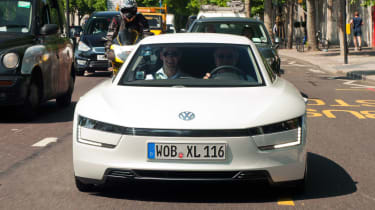 Every tiny detail of the bodywork is optimised for light weight and aerodynamic efficiency, from the wide front and narrow rear ends, to the magnesium, flush wheels and rear-view cameras (not mirrors). Best of all, it looks like a cool, modern Volkswagen – not unlike how a new Scirocco could look, with the VW badge proudly on the bonnet not the grille.

Of course the car is low, too, so gullwing doors are used to make it easier to get in and out. The side windows are polycarbonate, while winders are used to open them to save weight.

Open up the doors and you can see beautiful, bare carbon fibre – there’s an F1-style carbon monocoque the passengers sit in, carbon-fibre reinforced plastic body parts and carbon-ceramic brakes for their light weight rather than their (impressive) stopping power.

Even the dashboard is made of weight-saving wood, but it has the quality look and feel of any other VW. There’s a stereo, Bluetooth connection and air-con – luxuries have not been scrimped on, but they’re all lightweight luxuries.

On paper, this car is a marvel. And on the road, it feels pretty special, too. You press the start button, slide the gearlever into drive and the diesel engine will kick in to let you know you’ve started – handy if you’ve ever wondered if you’ve actually started a Prius.

The electronic parking brake releases and off you go, with the car behaving like any other hybrid, electric power backed up by an engine. When you want a bit more power or battery charge drops, the engine will growl again, like a dog with a bone when you approach it slowly. After a while, you get used to it, especially as the transition between on and off is so seemless. 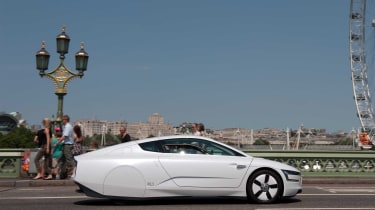 You can select full EV mode for silent progress for around 30 miles, or sports mode with both working together for maximum power and fun.

And it can be fun – quick too, with swift throttle response, whatever mode you’re driving in. Top speed is limited to a more than adequate 100mph.

The unassisted steering is a joy – hugely communicative (thanks to the aero-friendly skinny front tyres) and responsive. The steering wheel itself is a wonderful thing to hold, too – small and perfectly formed.

Front-end grip is surprisingly strong and there’s next to no body roll if you push hard around a bend. Yet in spite of the apparently sporty set-up, the ride quality is surprisingly good: firm, but with a sense of quality about it.

Which sums up the car perfectly – it might be lightweight, but it feels like a robust, high-quality Volkswagen. That the drive is, in the greater scheme of things, pretty unremarkable, is perhaps the most remarkable thing about the XL1. This, after all, is a car that achieved over 200mpg on our Central London test drive, and claims it can average up to 313mpg – beating Dr Piech’s vision by some margin.