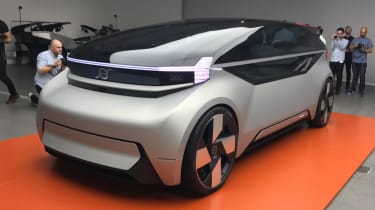 Volvo’s vision of an autonomous future has been previewed by the 360c concept – a car the company claims could transform it from a traditional car maker into a transport company rivalling airlines, train companies and bus operators with a first class, door-to-door service.

The fully-electric 360c claims to be part car, part office, part bedroom, part living room and even somewhere you could hold a party – all while being autonomously driven from A to B.

The interior mimics first-class-style aircraft ‘pods’ where users can work, sleep or entertain, with Volvo claiming it can transform how and where people live.

As well as safety and environmental benefits, such as reduced pollution and congestion congestion, Volvo says it could bring health and lifestyle benefits by reducing the need to live in built-up cities with autonomous travel to and from work. Volvo also says it could have an effect on the housing market, increasing what it calls ‘residential freedom’ by reducing pressure on house prices and more introducing more affordable home ownership.

“The 360c explores what becomes possible when we remove the human driver, using new freedoms in design and recapturing time – it’s a glimpse at how autonomous drive technology will change the world as we know it,” said Marten Levenstam, Volvo’s senior vice president of corporate strategy.

“People becoming less reliant on proximity to cities is just one example of the impact of removing the burden of unproductive travel time. The 360c driving office makes it viable for people to live at greater distances from crowded cities and use their time both in a more pleasant and more effective way.”

Production for the 360c is highly unlikely for several years, though, with Volvo seeing it more as a ‘conversation starter’ among various stakeholders into future infrastructure needs.

Volvo has also used the unveil of the 360c concept to call for a universal standard for autonomous cars to communicate with other road users. Without a driver at the wheel, pedestrians can’t rely on human contact to make a decision on how to interact with a vehicle. So Volvo’s engineers have focused on creating a universal standard, so other road users don’t have to consider the make of autonomous vehicle they’re interacting with. 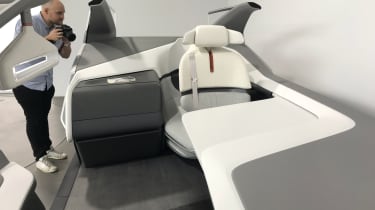 The 360c uses a combination of external sounds, colours, visuals, movements, to communicate the vehicle’s intentions to other road users. “We strongly believe this communication method should be a universal standard, so all road users can communicate easily with any autonomous car, regardless of which maker built it,” said Malin Ekholm, vice president at the Volvo Cars Safety Centre.

Now read about the Renault Symbioz concept, which previews autonomous features that could arrive by 2023…