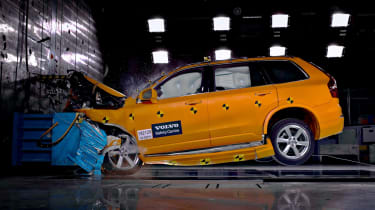 Volvo has launched a centralised digital library which details all the motoring safety innovations the firm has developed throughout its history. The Swedish company encourages other manufacturers to draw on the library, continuing its 60-year tradition of publicly sharing the plans for its most important safety equipment.

The library’s launch coincides with the 60th anniversary of one of the most important in-car safety technologies: the three-point seat belt. Volvo developed the technology in 1959 and, instead of privatising the patent and pocketing the revenue, the firm released its designs publicly, with the aim of improving overall road safety.

Over the past 60 years, Volvo has produced a range of crash-safety technology, the patents for all of which it has made publicly available. Notable examples include the side-impact protection system (SIPS) and whiplash-preventing head-restraints for the eighties and nineties. More recently, the brand has developed shock-absorbing seat pads, which claim to reduce spinal injuries during run-off accidents.

Volvo’s latest collaborative venture comprises 60 years-worth of research, which is currently being used to analyse the different crash safety requirements for men and women. For example, the firm claims the difference in anatomy and neck strength for the average man and woman mean that females are more likely to suffer from whiplash injuries.

“We have data on tens of thousands of real-life accidents, to help ensure our cars are as safe as they can be for what happens in real traffic,” said Lotta Jakobsson, professor and senior technical specialist at Volvo Cars Safety Centre. “This means our vehicles are developed with the aim of protecting all people, regardless of gender, height, shape or weight, beyond the ‘average person’ represented by crash test dummies.”

What are your thoughts on Volvo’s collaborative safety agenda? Let us know in the comments section below…