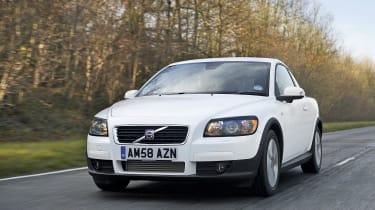 Creating a low-emission version of a car is easier to do on some models than others.

For Volvo, converting the S40 and V50 to put out less than 120g/km of CO2 was relatively simple. Doing the same thing to the smaller C30 proved more difficult.

On a shorter car, you have to work harder to make the same aerodynamic gains as on a longer model.

So as well as the new wheels and blanked-off grille of its big brothers, the C30 gets panels underneath, a diffuser and new rear bumper. There’s a bigger roof-mounted spoiler as well. The combined effect is that the C30 is the most striking of the three DRIVe models.

It uses the same 1.6-litre diesel engine as the S40 and V50, and comes with the longer gear ratios, too. Since the powerplant has been tweaked to offer ultimate fuel efficiency rather than performance, the smaller Volvo’s slightly lower weight translates into better economy of 64.2mpg and emissions of 115g/km.

Surprisingly, it doesn’t feel any quicker. And while the diesel’s throaty nature is better suited to the sportier C30 than the larger models, the Volvo hatch still doesn’t do enough to challenge the class leaders.

Rival: Focus ECOnetic while Ford and Volvo hatches are mechanically very similar – they use the same engine – the Focus is more practical, better handling and more comfortable.