We're first behind the wheel of Volvo's scorching hatchback, the XC30 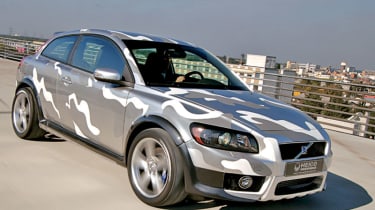 If Heico’s XC30 really does give us a glimpse of what to expect from Volvo’s forthcoming C30R flagship, we’ve got a lot to look forward to. Ignoring the outrageous paint job and raised ride height, the tweaks made to the engine work brilliantly, and it sounds fantastic. If Heico could breathe similar magic on a regular C30 T5’s suspension, Volvo would have an accomplished flagship for its new hatchback range.

Take one of the year’s most eagerly anticipated compact family cars, add the engine of a hot hatch, the ability of an off-roader and round it all off with Volvo’s reputation, and what have you got? A 300bhp, four-wheel-drive superhatch... and Auto Express is the only magazine to have got behind the wheel.

Although German tuning company Heico built this XC30 for Volvo, the machine gives a brilliant insight into what the Swedish firm’s top C30R-spec model will be like to drive.

The XC30 borrows heavily from the standard C30 T5. Beneath the bonnet, there’s the 2.5-litre five-cylinder engine from the Ford Focus ST. But Heico has binned the low-pressure turbo in favour of a high-pressure unit. So instead of a sensible 0.5 bar of boost pressure, it pumps out 1.2 bar. There’s also water injection for the intercooler to lower temperatures and increase power even further. The bottom line is a hike from 217bhp to 300bhp.

In the process, Heico has also fitted the four-wheel-drive system used on the V50 AWD estate. The result is that when you floor the throttle, all that power goes straight to the tarmac, and the little hatchback rockets forward in a much more controlled manner than the standard front-wheel-drive model.

On paper, the XC30’s 5.9-second 0-62mph time is just over a second faster than the T5, but from a standstill you barely register that you’ve let the clutch out before the engine is roaring a request for second gear. The sound is appropriately throatier, with an entirely new exhaust system which has been tuned to both the character of the five-cylinder engine and the sportier nature of the car. It not only looks the part, with four chromed tailpipes peeking out from under the rear bumper, but when you back off the throttle, the popping and banging sound great.

The motor feels extremely responsive, too, with its 300bhp. Yet crucially, it hasn’t lost any of the good manners which have made it such a success under the bonnet of the Focus ST. The smooth-revving unit’s delivery is consistent, and feels perfectly matched to the Volvo’s modified chassis.

Although this model has been lifted by 30mm to accommodate S40 suspension components, you’d never know it inside – it barely makes any difference to your view of the road ahead. And Heico spent considerable time fine-tuning the handling at the famous Nürburgring circuit in Germany, so from behind the wheel, it certainly doesn’t feel like an unwieldy SUV, or even a badly modified hot hatchback.

In fact, the way it grips the road isn’t too far removed from the standard car. There’s communicative steering, and despite the taller ride height, hardly any body roll. But while it’s perfectly predictable, it doesn’t urge you to push the car to the limit, as a truly sporting machine might.

On the plus side, that gives more time to appreciate the changes that have been made to the cabin. The interior has been tweaked rather than changed significantly. The electrically adjustable seats remain, which is a shame, because taller drivers can’t get low enough behind the steering wheel. On the upside, the chrome effect around the floating centre console and on the gearlever has been polished, which lifts the cabin ambience. Otherwise the interior has been completely decked out in dark leather, which lends it the feel of a grand tourer rather than a full-on sports car.

And then there’s the paint job. From a distance, you would think that the car was covered in stickers, but it’s not. The XC30 has been through the paint shop seven times to get the chrome, silver and white camouflage effect. This colour scheme is a one-off for this machine, though, and is unlikely to make production.

What’s under the skin of the XC30 is certainly no flight of fancy, though. It was commissioned by Volvo North America for the SEMA modified car show which opened in Las Vegas this week. But as a test bed for the C30R, it makes a fine starting point.