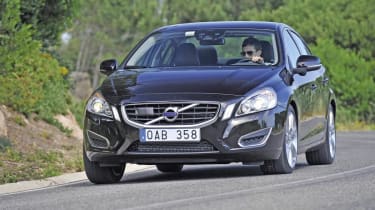 The new Volvo S60 is a vast improvement. With exciting styling and better dynamics, it’s a real rival to the Audi A4, BMW 3-Series and Mercedes C-Class. And the punchy new five-cylinder diesel provides a fine blend of performance and running costs which is sure to appeal to private and business buyers alike.

Badges can be confusing. Take the new Volvo S60, for example. When the BMW 3-Series rival arrives next month, buyers will get a choice of a 3.0 six-cylinder T6 petrol and a 2.4-litre five-cylinder D5 diesel. But the top seller will be an all-new D3 diesel – which, despite the badge, is not a three-cylinder.

Instead it’s a 2.0-litre version of the D5 five-cylinder with one turbo, rather than two. As a result, power is down from 202bhp to 161bhp – although torque output drops by a mere five per cent.

Only at the top end of the rev range do you notice the difference – the D3 runs out of puff after 3,500rpm, while the D5 keeps pulling. This won’t be apparent in normal driving; owners are likely to focus more on the plentiful in-gear shove for overtaking. The unit is less gruff than the D5, too.

Really, it’s hard to justify paying the £2,655 premium for the larger engine. We’d spend the money on the optional Geartronic auto box – this suits the S60 better than the manual, which has a long throw and a vague feel. You can also catch your elbow on the centre console when changing gear.

The only saving grace is that the manual is more efficient. And because it emits less CO2 than the Geartronic, buyers can cut their road tax by £46 a year.