he Volvo S60 is a good choice for compact exec buyers seeking value, but it’s bettered by newer rivals 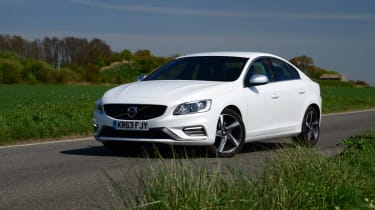 The Volvo S60 saloon has been around since 2010, which is pretty long stretch for any new car these days. It was facelifted in 2013, but for a model which aims to fight for sales in the fiercely forward-looking compact executive sector, the S60’s all-new replacement due in 2018 can’t come fast enough.

The Volvo S60 lines up against rivals that include such showroom stars as the Audi A4, BMW 3-Series, Jaguar XE, Lexus IS and Mercedes C-Class which illustrates the scale of its challenge. However, the lack of relative demand for Volvo’s executive model means prices look quite attractive compared to many rivals, and place the S60 somewhere between them classier ‘mainstream’ options like the Volkswagen Passat.

Although the S60 was launched with some fanfare by then new Chinese owners Geely back in 2010 as the sportiest and most dynamic Volvo saloon ever produced, it retained the brand’s trademark focus on safety. However, in a more recent quest for fuel efficiency (or more cost-effective production) the engine range has been reduced to a limited series of diesel options at 119bhp, 148bhp and 188bhp, and a single 188bhp diesel. All are turbocharged two-litre four-cylinder units, whereas most rivals are available with meatier sixes. 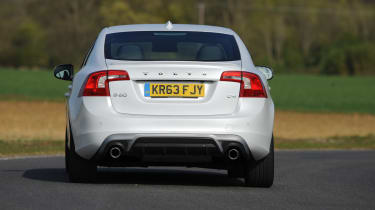 You can buy a Volvo S60 in any one of six trim levels though, starting off with the S60 Business edition which features Volvo City Safety tech, LED running lights, 16-inch alloys, rear park assist, electronic climate and cruise control, plus Volvo’s Sensus Connect infotainment with navigation, DAB and Bluetooth. The S60 Business Edition Lux adds leather seat facings, a TFT driver display, rear view camera and 17-inch alloys. The S60 SE Nav is next on the list, with a variety of interior trim upgrades and luxuries like an auto-dimming mirror and auto-fold mirrors, plus chrome embellishments outside.

You used to be able to get an S60 Cross Country, which was a saloon version of Volvo’s jacked up V60 estate with off-road styling cues, but this has been dropped from the line-up along with the hot performance version formerly called the S60 T6.

The Volvo S60 brought a fresh-face to the compact exec class back in 2010, replacing a somewhat dowdy predecessor. A face-lift in 2013 improved the S60’s image further, and the car has plenty of showroom appeal thanks to premium-quality fit and finish, and an upmarket cabin ambience with attractive Swedish design features.

There’s a strong range of diesel engines offering good performance and great economy, but that’s where the positive news begins to peter out. The S60’s biggest problem is the unrefined ride and unsophisticated handling – failings almost guaranteed to put off those thrusting exec-types used to the more finely-honed responses of rival German driving machines.

Diesel engines offer punchy performance, but the ride and handling are unimpressive

Irrespective of engine size, the Volvo S60 responds sharply to driver inputs thanks to its direct steering - it also has strong front-end grip. However, there’s little feedback through the S60's controls and broken surfaces severely upset the ride. Furthermore, potholes and steady bumps send unpleasant jarring sensations through both the steering wheel and the seats into the cabin.

While the suspension never feels particularly settled at any speed, a relatively heavy kerbweight is also its undoing in corners and the Volvo can’t disguise its mass as it rolls in bends.

The steering itself needs a fair amount of effort and the Volvo has a large turning circle. What's more, its long brake pedal doesn’t feel overly responsive but it does deliver good braking performance. The Volvo S60's manual gearbox needs a firm hand to change ratios, and the heavy clutch takes some getting used to. 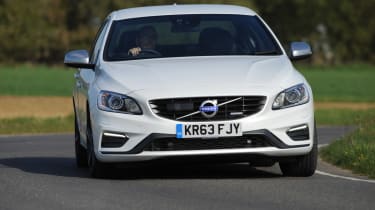 However, the car is fairly refined at higher cruising speeds, so on the motorway, the Volvo S60 is relaxed and low noise levels make for chilled-out journeys.

Over recent years, the S60 engine range has been slimmed down and replaced with a brand new line-up that offers better fuel economy and is kinder to the environment – the 112bhp 1.6-litre diesel and thunderous 304bhp all-wheel drive T6 six-cylinder petrol being notable casualties. There's now a range of four-cylinder petrols and diesels, and all engines are smooth and economical.

Diesels offer good efficiency, but a wise investor will avoid the petrol versions

The diesel Volvo S60 D2 is the greenest thanks to 99g/km CO2 emissions and a claimed 74.3mpg figure making it an attractive proposition for company and private buyers. If you have to have petrol the T4 variant is the only option. It emits 131g/km (135g/km auto) and returns 50.4mpg (48.7mpg auto). 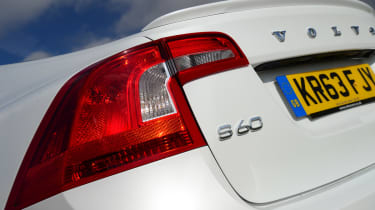 Residuals on the Volvo S60 are strong, but there are so many different trims and options available that it's actually quite easy to get carried away and spend more than you planned to on speccing it up. That said, Volvo fits every S60 model with cruise and climate control as standard, along with a DAB radio, Bluetooth connectivity and auto wipers.

Servicing from main dealers is also quite pricy and Volvo is not known for doing fixed price offers like some of its main rivals.

Insurance groups aren’t too bad for the S60, ranging from group 17 for the least-powerful diesel – the D2 – up to group 28 for the strongest performing D4 models in higher specs.

If you want your Volvo S60 to look after your money, it pays to choose your model wisely. Industry experts CAP reckon the T3 petrol models will fare worst, returning just 29 or 30 percent of your investment after three years and 36,000 miles of motoring.Best of the bunch should be the D2, D3 and D4 diesel models in Business Edition trim, each returning 41 or 42 percent. Everything else falls somewhere in-between.

There's no doubt that the Volvo S60 was a breath of fresh air when launched, thanks to its sleek lines and bold detailing. Its three-box shape has been smoothed off to give it a coupe-like profile, with steeply raked front and rear windscreens, small side windows and a raised rear end. Boomerang-esque rear lights and square-edge exhaust pipes add to the charm.

The 2013 facelift saw Volvo add a wider grille and new headlights up front, although the pedestrian-friendly humped bonnet still looks a bit ungainly. At the rear, the tail-lamps have been extended on to the bootlid.

The Volvo S60 R-Design has a sporty edge thanks to its aggressive bodykit, rear lip spoiler, lowered suspension and 18-inch alloys, but the SE version still looks sharp with simpler lines and 17-inch wheels. 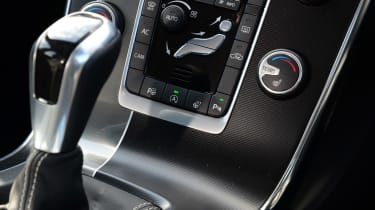 Climb inside, and Volvo continues the upmarket feel with a minimalist and attractive cabin, which uses Volvo's familiar design cues. The light-coloured materials and clever design deliver a bright and airy feel.

The S60's flat-fronted centre console has a bank of buttons and features a central keypad, which is flanked by four rotary controls. Lower down is Volvo’s usual air distribution pictogram that allows you to select which air vents to open.

Volvo’s TFT instrument pod is crystal clear and adds to the upmarket feel of the car. However, it's not the easiest system in the world to operate and the controls do take some getting used to. It's also easy to reach for the wrong dial – you can end up retuning the radio instead of adjusting the temperature.

Business models include an upgrade to Sensus connect with a 7-inch colour display, internet browser and access to web apps, plus sat-nav and HDD music storage – but you can buy the package as an option on other models. There’s an optional 12-speaker Harman Kardon version too, with DVD player, surround sound and 650 Watts.

The S60’s cabin is comfortably appointed, but not the most spacious. The boot is miserly, too.

While the cabin of the Volvo S60 is a pleasant place to be thanks to its comfortable seats and airy driving environment, some of the switchgear on the dash is confusingly laid out.

Some drivers will find it tricky to find a natural driving position in the S60 too as, bizarrely, the seat tilts when it raises and lowers. The centre armrest also obstructs gearchanges, which is annoying and seems ill-considered.

The cabin is pretty good for storage though, with a spacious glovebox and well-sized door bins. That annoying armrest conceals another cubbyhole, and there’s a tray for loose change and other small items behind the centre console.

The S60 only comes in the regular four-door format, and with five seats.

Sadly, despite its pleasant atmosphere, the Volvo S60 isn't the most practical car in the compact executive class - passengers in the back get slightly less space than in an Audi A4 or BMW 3 Series, and headroom could be a problem for taller passengers. 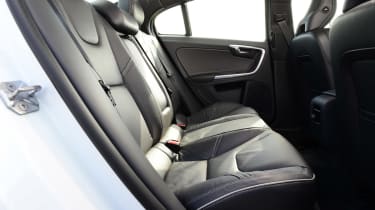 The middle seat is pretty cramped too, so really only of use to children.

On the plus side, access to the rear is easy thanks to the S60’s long back doors, and seat comfort is excellent. Isofix child seat mounts are a standard feature too.

The S60's 380-litre load capacity is pretty small, and the wheelarches and bootlid hinges also cut into the load bay, leaving an awkward shape to work around. In comparison the Audi A4 offers 480 litres, and the Mercedes C-Class 475-litres.

However, the Volvo S60 does get seat release levers in the boot, and a flip-up divider is also useful touch although underfloor storage is limited. Fixed and detachable towbars are optional, as is a 400-litre roof box.

Towing weights of up to 1,900kgs are possible with the highest-rated D4 AWD model, although the lowest-rated T3 petrol auto can only manage 1,500kgs.

Volvo maintains a solid reliability record, and the S60 upholds the brand’s long-standing reputation for safety.

Volvo has a historic reputation for building cars that will run and run. However, while the gadget-laden S60 is unlikely to stand the test of time quite as well as simpler models of the past, it’s been in production long enough for most niggles and faults to have been resolved.

Volvo was rated 17th overall out of 30-odd manufacturers in our 2015 Driver Power customer satisfaction survey. The ranking dropped to 20th when Volvo was measured on reliability alone, but the brand scored an impressive 6th place for build quality.

One area where Volvo can’t be faulted is safety. There is a raft of passive and active systems on board, including a full set of airbags, side impact protection, anti-whiplash headrests and Volvo’s innovative City Safety low-speed collision prevention system. 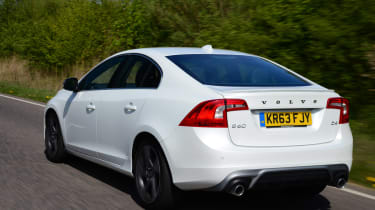 Euro NCAP hasn’t independently tested the S60 saloon, but its engineering and body structure is identical to the V60 estate from the windscreen forward. The V60 attained a five-star rating and a 100 per cent score for safety assistance systems in 2012. Adult occupant safety in the V60 was rated at 94 per cent, child occupant safety at 82 per cent, and pedestrian safety at 64 per cent.

On the S60 options list are further hi-tech safety features such as pedestrian detection, which promises to automatically stop the car from speeds under 20mph, in the event of a pedestrian obstructing the car's path. You can also choose lane departure warning; blind spot warning, adaptive cruise control and driver alert warning.

The Volvo S60’s standard warranty offer is three years with a 60,000-mile cap. BMW offers the same warranty length, but with unlimited mileage.

Volvo offers a flexible service plan that covers routine maintenance and allows the costs to be spread over monthly instalments. You can check your vehicle details on the Volvo website, but the three-year 54,000 mile option on a D4 S60 should cost around £350.