Nicely designed, well built and better value than its rivals, the Volvo S80 has lots going for it 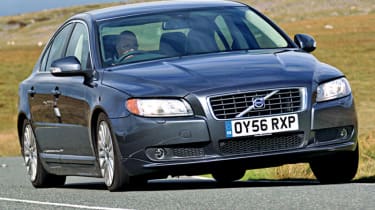 Nicely designed, well built and better value than its rivals, the S80 has lots going for it. But the ride isn’t that supple, and the D5 diesel could be smoother. It will have its work cut out to make an impression in the class.

The C30 may be attracting all the attention, but if you want to get behind the wheel of a fresh-faced Volvo before the year is out, the latest S80 executive saloon is your best bet.

Now arriving in UK dealerships, the second-generation model looks similar to its predecessor, but gets smoother edges and softer curves. There is a choice of five engines and four trim levels. Prices start at £24,375, rising to £41,725 for the four-wheel-drive V8-powered flagship – a first for a Volvo saloon. Yet while the 4.4-litre 315bhp unit is exciting, it’s not likely to sell in large numbers to typic­ally cost-conscious S80 buyers.

Instead, more than 60 per cent of customers are expected to choose one of the two diesels on offer – the 2.4D and D5. Both use the same 2.4-litre five-cylinder engine, but with a choice of either 163bhp or 185bhp. Opting for the D5 driven here knocks one second off the 0-60mph sprint time – it’s reduced to 8.0 seconds. CO2 emissions and economy figures are barely changed, either (at 167g/km and 44.8mpg on the combined cycle), although this model adds around £1,100 to the price.

The engine is strong, but it doesn’t feel as smooth and refined as the best German rivals. And the front-wheel-drive layout doesn’t exactly help matters. The chassis isn’t as balanced and res­pon­sive as those of the class leaders, while the ride isn’t particularly cosseting – in fact, it becomes rather harsh on rough surfaces. Still, all models are big inside, have supportive seats and provide excellent driver comfort.

The ‘floating’ centre console design is borrowed from the S40 compact exec-utive, but is less striking in this larger car. So overall, we’re not sure Volvo has done quite enough to tempt customers away from more established rivals.