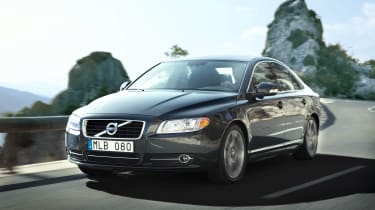 Some cars are best defined by what they aren’t, not what they are. The fact that the S80 isn’t a BMW, Audi, Jaguar or Mercedes is integral to its appeal. It is a comfortable long-distance cruiser, but the chassis improvements and lusty new twin-turbo add much needed driver appeal, too – although it’s still no sporting saloon. The facelift means the S80 should now be seen as a serious class competitor.

What do the Bentley GTC and Volvo’s latest S80 have in common? They both feature twin-turbocharged engines!

The Swedish firm has brought in a range of changes to pep up its BMW 5-Series challenger – chief of which is an uprated 2.4-litre five-cylinder diesel.

As a result of the extra turbo, power is up to 202bhp from 163bhp, yet the engine is eight per cent more economical, at 45.6mpg. It’s sublimely refined – only under heavy throttle is the five-cylinder warble noticeable. And the 420Nm of torque makes for an effortless drive, too.

Other upgrades include several chassis set-ups. Comfort gives a supple but bouncy ride and overly light steering, yet the Lowered Dynamic Chassis is a real improvement. Shorter springs, improved dampers and harder bushings offer sure-footed handling. The S80 is better on twisty roads as a result, although not as sharp as a BMW.

Completing the changes are a more prominent grille and additional chrome trim to give the handsome Swede extra presence. Inside, the cabin gets a new steering wheel and classy Swiss watch-inspired dials. It all adds up to a luxury car that offers an interesting, desirable alternative to the mainstream.

Rival: Merc E220 CDI standard adaptive dampers and a sharper chassis make the new E-Class better than ever to drive – but it’s still a brilliant luxury car with a great ride. BlueEFFICIENCY tweaks make it amazingly economical as well.