The Volvo S80 is a comfortable, spacious and safe saloon, but it’s showing its age despite a facelift 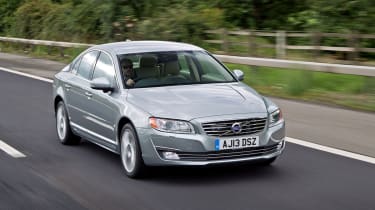 The Volvo S80 is the Volvo's executive saloon, and with similar dimensions to the Audi A6 and BMW 5 Series. It's certainly spacious and has lots of equipment as standard, not to mention a range of diesel engines. For 2014, the car's had a facelift, but that can't hide the problem that it has been on sale since 2006. It's ready for replacement. The S80’s ride is quite unsettled, unless you spend extra on the adaptive chassis control, and the big Volvo can be very costly to run if you go for anything other than a DRIVe model. It just doesn't stand out next to newer and far more competent competition from the German prestige brands, as well as the Jaguar XF.

The Volvo S80 has a wide range of engine choices. Eco-friendly DRIVe variants come with a 114bhp 1.6-litre diesel, the D3 gets a 134bhp or 161bhp 2.0-litre diesel, and there's also a 212bhp 2.4-litre five-cylinder diesel for the D5. As for petrols, there aren’t any to choose from in the line-up, leaving you with the selection of gearboxes. A rather imprecise six-speed manual is standard, although the Ford-sourced D2 can only be had with a twin-clutch auto. The top-spec D5 can be had with Volvo’s ageing Geartronic six-speed auto that’s nowhere near as smooth or efficient as rival systems. We'd go for the D3, as it provides decent punch and mpg, too. Vague steering lets the S80 down in corners, and it's not keen on changing direction either, although the optional Active Four-C chassis does help. The ride is unsettled over poor road surfaces, although it's fine on the motorway. Refinement is only average, with some engine noise on the diesels and some crashing from the suspension over bumps.

If you want to get as many miles out of a tank of diesel as possible, then the DRIVe versions will be for you. They're slow, but Volvo claims 68.9mpg and emissions of just 109g/km. That's not bad when you consider the £25,000+ price tag. However, the D3 provides a better performance compromise and does around 65mpg while emitting 114g/km. The big problem for the S80, though, is depreciation. Its lack of desirability means there's little demand on the used market. At least service intervals of 18,000 miles mean you won't see a dealer that often.

Despite its age, the Volvo S80 has quite an attractive, if rather anonymous, design. Its most recent facelift added a new grille with better integration of the large radar sensor, new front and rear bumper, new rear lights, extra chrome trim and the option of 19-inch rims for the first time.  It’s not fashionable, and doesn’t look very contemporary, especially when compared with trendier designs from Audi and BMW. Inside, the S80 really shows its age – it's nowhere near as upmarket in terms of design and material quality as rivals from Audi, BMW and Jaguar. But while it’s not a fresh design, at least the interior feels well put together.

The Volvo S80 is a large car, and as a result it has lots of space for four tall passengers. The driving position is very good, although the oversized steering wheel takes a little getting used to. There’s lots of adjustment and the seats are some of best on the market - supportive and capable of leaving you ache-free after many miles at the wheel. The cabin is old, but at least it's logically laid out, although visibility is marred by the chunky windscreen pillars. Despite decent passenger space, boot space is only 422 litres – a BMW 5 Series has another 100 litres.

Volvo cars are known for their excellent safety, and the S80 is no different – it has traction and stability control, six airbags and active anti-whiplash head restraints as standard. Options include BLIS, Volvo's blind-spot warning system, as well as active cruise control – which keeps the car a set distance from the vehicle in front, and even automatically slows the car down. Reliability should be good – the S80 has been on the road long enough for any major faults to be ironed out – and there's decent service from Volvo's dealers, too, including fixed-price servicing packages. The new Sensus Connected Touch touchscreen web-connected infotainment system is decent, but is a dealer-fit option, rather than a properly integrated system as with its rivals. 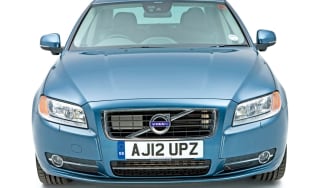 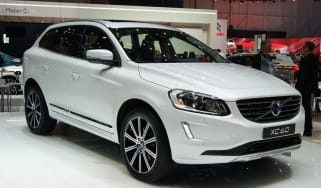 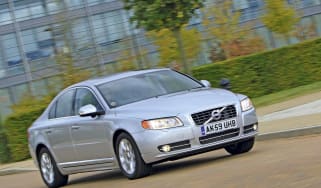 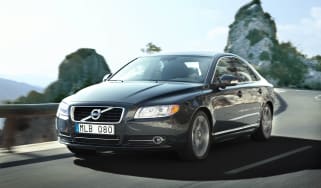 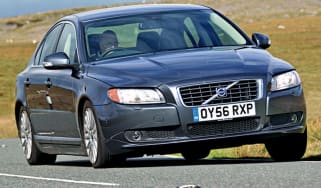 Nicely designed, well built and better value than its rivals, the Volvo S80 has lots going for it
Volvo S80 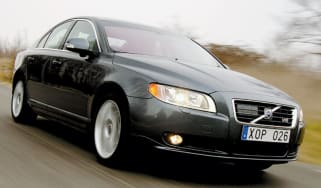 Challenging the might of German executive cars isn't easy, but Volvo's willing to try with the new S80
Skip to HeaderSkip to Content