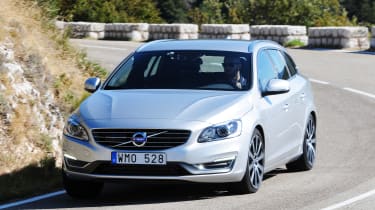 Volvo’s impressive new engines prove even a small company can set standards in the class. The D4 is extremely efficient, yet demands no compromises on performance, while the eight-speed auto is a big improvement. But until a new V60 arrives, Volvo might struggle to deliver a complete package that can tempt buyers away from the competition.

This car looks like any other Volvo V60, but it’s powered by the first in a new range of Drive-E engines that marks the next step in Volvo’s development.

And by the end of 2015, the 2.0-litre petrol and diesel units – designed and built in Sweden – will have replaced almost every engine in the company’s line-up.

As a result, the car sits in the same road tax band and incurs Benefit in Kind tax at the same 17 per cent rate, but is over halfa second faster from 0-62mph, with a time of 7.6 seconds.

One of the secrets of this strong economy is a new i-Art injection system, which monitors the amount of fuel required in each cylinder constantly so that it can make every combustion cycle as efficient as possible.

On the move, the biggest difference is the new eight-speed auto, which has an ‘EcoCoast’ function that disengages the clutch when you’re cruising to help save even more fuel.

Changes are smoother and quicker than in the old Powershift box, and if you use the £150 optional steering paddles for manual changes, the ratios feel more evenly spaced.

The new engine feels muscular and delivers its maximum 400Nm of torque from just 1,750rpm. It pulls strongly through the gears, but soon becomes noisy and strained at higher revs.

The V60’s ageing chassis also lets the powertrain down. The artificially heavy steering, overly firm suspension and poor low-speed body control mean the Volvo is a lot more comfortable being driven gently than when you’re trying to press on.

A recent facelift sharpened up the exterior, and the interior is as comfortable and sturdy as ever – although the V60 isn’t the roomiest estate. The 430-litre boot is smaller than a Peugeot 308’s, and getting three into the rear seat would be a squeeze.

The powertrain moves the game on, but to get the best from it Volvo needs a new car.