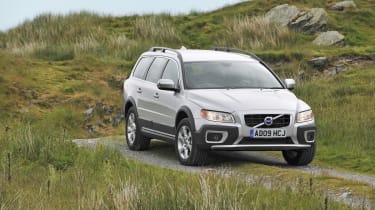 Its tough looks will fool people into thinking it’s a go-anywhere machine, but the XC70 DRIVe is the automotive equivalent of a Barbour jacket without the Hunter wellies. And that’s no bad thing for the environment.

The concept of off-roading takes on a whole new twist with Volvo’s XC70 DRIVe! It might appear to be an environmentalist’s nightmare, but beneath the tough exterior of this jacked-up estate beats a green heart.

Under the bonnet is a detuned version of Volvo’s 2.4-litre D5 turbodiesel unit. In green DRIVe specification, this delivers 173bhp, which means performance is down. A switch from four-wheel drive to front-wheel drive hampers pace further, but the result is big fuel and CO2 savings. The DRIVe belies its rugged looks by returning 47.1mpg and emitting only 159g/km.

On the road, the loss of four-wheel drive isn’t apparent in everyday use. The raised suspension does mean there’s a bit more body roll in bends than in the standard V70, but the trade-off is decent ride comfort. Add an interior that looks as though it will take absolutely anything a family can throw at and in it, and the big XC70 feels as tough and capable as ever.

You might have to admit your secret if your neighbours ever pop by on an icy morning wanting you to take their kids to school. But that’s worth it for the fuel and CO2 benefits the front-driven XC70 DRIVe brings the rest of the year.