Impressive fuel economy, although wet performance is a concern 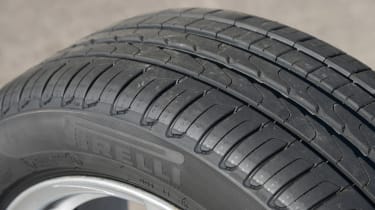 Impressive fuel economy, although wet performance is a concern

Launched in 2012, the P7 Blue was the first design to achieve the tyre labelling holy grail of a double A rating – top bands in both fuel economy and wet grip.

It may have dropped to a B for fuel economy, but it still topped this test ahead of experts Goodyear and Dunlop. The trick is to get low rolling resistance while retaining wet grip.

Yet away from the confines of labelling testing, the P7 Blue was off the pace of the frontrunners. Its resistance to aquaplaning was poor at best. And in wet braking it needed more than six metres longer than the class-leading Continental. The track revealed a tyre that was front limited, lacking traction on lock and off the turns. In cornering, it was second in a close test, but despite this it still left the Cinturato the worst performer across the wet tests.

It was more at home in the dry, where it was just half a second off the handling test winner and around four metres off in the braking test. It felt one of the sportier tyres, with sharp steering and good traction. Still, you can’t help feeling this is a tyre with a single focus, and such designs never fare well in our test, which demands all-round performance.