We test the top electric scooters so see which is best for range, price, riding experience and more 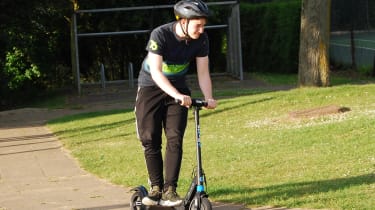 In major cities across the world, the use of electric scooters has shifted out of the playground and onto the pavement. Advances in both battery technology and product engineering mean these quick and compact commuters are easy to store in the smallest of car boots. They can allow you to park more cheaply or even for free a fair distance away from your ultimate destination and then scoot the remaining way.

In addition, electric scooters are perfect for getting around event campsites, race tracks and shows. We charged up six of the best on the market, and then put them to the test to see which is the one to stash in your car’s luggage space.

All the scooters used in this trial were first charged overnight and then ridden over a test course of three miles around a private estate. We figured this would simulate an average commute. Two riders – one weighing 79kg and the other 90kg – then tried to ride up a four per cent slope to see whether the scooters would manage to ascend minor hills without any assistance.

Additional points were awarded for models that were easy and quick to fold and load into a car’s luggage area. We found that some of the scooters are available at lower prices from overseas websites – but it’s worth checking the warranty and parts-supply situation before choosing one of these vendors over a UK-based company.

The Xiaomi M365 is a great all-rounder that does everything you need at a good price, so it takes the win here. However, if we were regularly riding for longer than a couple of miles or needed to climb hills, we would be tempted to make the investment and go for the Zero 9. The gadget-laden Ninebot takes the final spot on our podium. 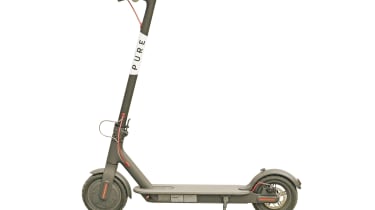 The M365 is the world’s best-selling electric scooter – and it’s easy to see why. It handled our hill test with no problems, and the pneumatic tyres did a reasonable job of soaking up bumps, even without suspension. There’s no fancy LCD display, but there is a smartphone app to control and monitor functions.

Unlike some of the scooters here it uses a conventional bike-style brake lever, which felt more natural than a thumb switch. It’s not the lightest, fastest or best equipped, but it does everything at a reasonable price. 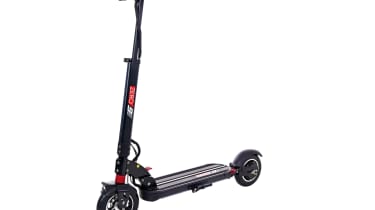 Aimed at the rider who will need to use their scooter every day, the Zero 9 is nicely built and boasts a 600W motor – more than twice the power of most rivals here. To handle the speed it has twin brakes, including a front disc. With front and rear suspension, along with pneumatic tyres, it gave us a smooth ride. It handled our hill easily, even with the heavier rider.

At 18kg, the scooter itself is on the heavy side, but it folds down easily to a boot-friendly size. If you intend to ride a lot, saving up for the Zero 9 might be worthwhile. 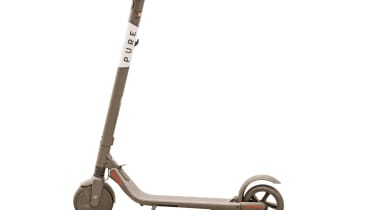 The Ninebot ES2 is packed with all sorts of gadgets. There’s a smartphone app that can control various functions and even change the colour of the lights under the deck. More useful are the comprehensive LCD display, easily accessible charger port on the handlebar stem and lever that makes folding easy.

It managed our tests without issue, but we found the brakes tricky, making the scooter hard to balance going around corners. It’s a good product, but unless you are keen on the extra gizmos, we’d suggest saving £100 with the similar-looking M365. 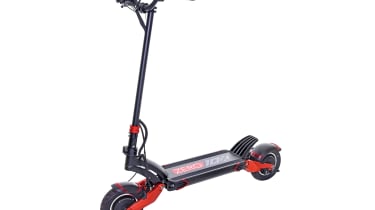 In size, looks and performance, the Zero 10X is at the extreme end of the scooter world. The 10X has two 1,000-watt motors, two-wheel drive and can top 40mph. It hardly noticed the test hill and could actually spin both its wheels. At 130cm long and weighing 35kg, it’s not the sort of thing you’d want to be lifting often, though.

Its sheer size also means it looks more like a vehicle than a toy, so it is unlikely to be welcomed in public places. If you have a private estate to ride around, however, it’s sure to be great fun. 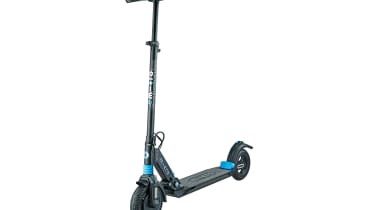 The Micro Merlin does everything well, and it has some useful features, too. These include a full-LCD display, cruise control, automatic lights and folding handlebars that make it far easier to store in a confined space. At 11kg, it’s light, too. Solid tyres mean there are no punctures to worry about, but with suspension on both wheels, the ride is still comfortable enough.

It made good progress up our four per cent test hill, even with the heavier rider on board. We really liked the Merlin, but it doesn’t look great value in this company. 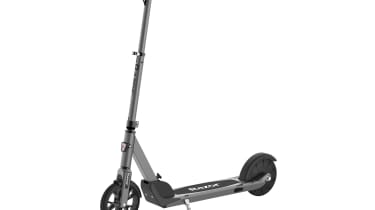 Despite its lightweight, the Razor looks well made – but with no suspension and solid tyres, it’s uncomfortable on anything except the smoothest roads. It is also held back by a maximum rider weight of 80kg. As a result, the Razor didn’t manage our four per cent test hill, even with our 79kg rider.

The low price means you can’t expect much equipment, either, with no lights and a basic battery-level display. However, it is very well priced in this company, and could well make sense for lighter riders who mainly scoot on smooth surfaces.