Cut cost and waste with a refillable water bottle for your car journeys. We test eight to see which is best. 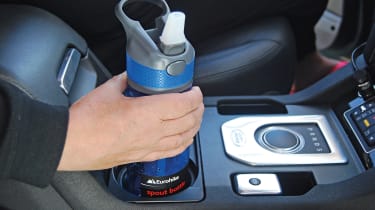 Staying hydrated is vital to maintain concentration while driving, and water is better for you than coffee or sugary drinks. But mineral water in a plastic bottle costs at least £2, while the resulting rubbish is bad for the environment and clutters up your car.

A refillable water bottle can be used again and again, is easier to drink from and can be topped up at home or a public refill point. But which is the best? We tried eight to find out.

There are thousands of water bottle designs on the market, so we concentrated on ones which are easily available either online or in supermarkets. They needed to be leakproof, fit snugly in a car’s cup-holder or door pocket, and be opened easily so you can sip while driving. Other points were given for price and ease of use.

Choose your water bottle carefully to make sure it will fit in your car and does everything you need.

If size isn’t an issue, the Eurohike Spout Bottle is easy to handle, nicely made and good value. The Asda alternative doesn’t have the same quality but it’s half the price. Finally, the clever Brita bottle is ideal for those who don’t like the taste of tap water.

It's not illegal for a driver to eat or drink while driving, but only do so when it is safe and won’t affect your concentration or control of the car.

If the police think it is causing a distraction or is impairing your ability to drive, you could receive a fixed penalty notice with a £100 fine and three penalty points on your licence. 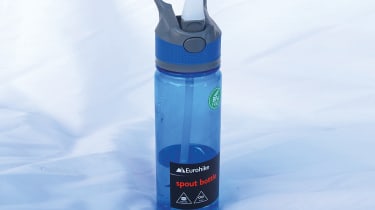 This bottle is big enough to see you though the longest journey. Pushing a button on the lid pops up a soft plastic spout, which is easy and comfortable to drink from on the move. It’s simple, no-nonsense and works well for drivers.

Our only word of caution is about the size. It’s 28cm high, so you may struggle to fit it into some car cup-holders without interfering with the controls; you might be better off putting it in a door pocket. 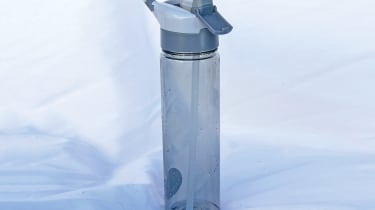 As a basic bottle for keeping in the car, this Asda offering works well and is great value. It looks and feels a little cheap next to the winning Eurohike but, like our Best Buy, it holds 700ml and has a nozzle which pops up by pressing a release button.

It’s easy to use one-handed and is leak-free when the top is in place. Thanks to a carabiner-style clip, you can attach it easily to a bag when out of the car, too. 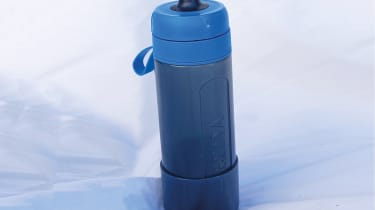 This Brita bottle filters the water while you drink, making it taste noticeably better. However, the downside is the price: the bottle itself costs £16 and you have to pay £15 for three replacement filters, each of which will last for four weeks or 150 litres. That’s still a lot cheaper than bottled water, though.

The lid is easy enough to use with just one hand but there’s no straw, so you have to tilt your head back and squeeze the bottle to get a drink. 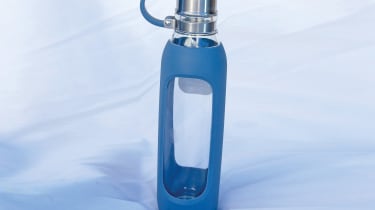 If you are not keen on the taste plastic or metal bottles can add to your water, then the Contigo could be the answer. It uses glass and only a tiny amount of stainless steel in the lid. A sturdy rubber ‘bumper’ protects the glass from knocks.

It’s heavy though – the full bottle weighs more than a kilo – and the lid has to be unscrewed. No straw means you have to swig rather than suck, too, so this is best used when parked up. 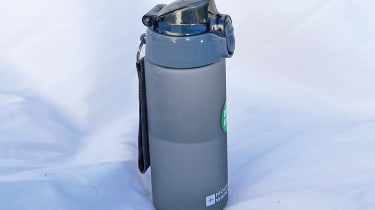 If space is tight in your car, then this small bottle from Mountain Warehouse could work well. At 20cm high and 7cm wide, it’s about the same size as a large drinks can. It proved leak-free but has a wide spout rather than a straw, so you need to tilt your head to drink.

A fabric strap makes this bottle easy to hold and handle, but because it’s quite small and has no special features, it looks a little pricey in this company. 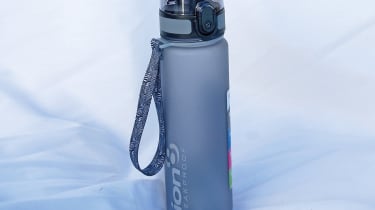 This is the perfect bottle if your cup-holder or door pockets are very narrow, because it’s exactly the same diameter as a standard soft drink can.

The lid is released by pressing a button, which can be locked with an extra clip to ensure it doesn’t get knocked and leak. There’s no straw so you have to tilt the bottle to drink, but the main let-down is the price. It’s of nice quality, but costs too much compared to the others here. 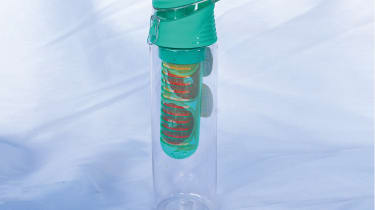 This bottle’s unique feature is a built-in ‘infuser’ which lets you drop pieces of fruit into the water to make it taste better. Like the smaller bottle from Mountain Warehouse, this uses a flip lid and a spout rather than a straw.

Although that 500ml version is easy to drink from, this one has an awkward lid that makes it tricky when supping because it gets in the way, especially while driving. It feels a little cheap, too. 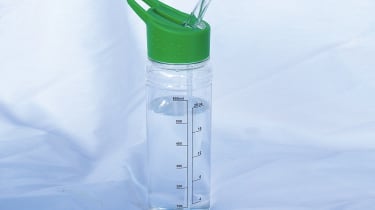 This pretty basic bottle is good value (it costs £4 online but we found it for £3 in-store) and holds an impressive 750ml. It’s simple to use, with a nozzle that folds out and can be opened with one hand.

The bottle also remained completely leakproof, even with the nozzle up. But it’s let down by the straw itself, which seems to suck in as much air as water while you are drinking, making it hard (and burpy) work to get refreshed.