A diverse set of screwdrivers will help with any garage job, we test eight to find the best 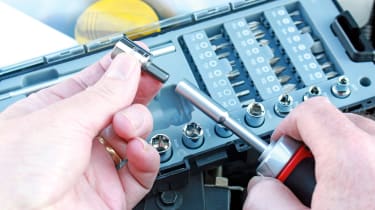 Buying a screwdriver set to suit all the different fasteners and sizes you’re likely to meet when working on your car would cost a fortune – and take up far too much storage space.

It makes a whole lot more sense to purchase a single driver with a range of interchangeable bits, especially because most of them also work with a cordless drill – although you may need an adaptor. But which is the best? To find out, we tested eight sets, three of which also had a range of 1/4-inch drive sockets, adding to their versatility for smaller jobs.

We looked for a wide range of bits, with the most important for car work being slotted, crosshead (Philips), hex (Allen) and star (Torx). Pozidrivs are also handy but not often used in cars, and our list of total bits includes any duplicates.

Having a case to help keep everything together was a real plus, as were clear markings. And including a selection of 1/4-inch drive sockets was a bonus. We preferred a ratchet driver because it’s easier to use – and the more teeth the better to help in tight spots. Finally, we took into account how much it cost, using makers’ prices and online sources.

The top six packages were very closely matched, but the new Sealey set just edged out our previous winner, the Halfords 58-piece collection, and the budget-priced Silverline. 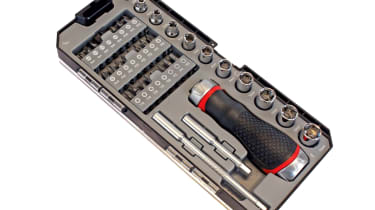 A good-quality package from Sealey, in a strong case with everything clearly marked. We liked the flip-up holders and, although this doesn’t have as many bits as the larger Halfords set (below), the gap closes when you take duplicates into account. It includes the widest range of metric sockets, spanning 5-13mm, but the driver itself clinched the win: it’s 120mm long with a thick, knurled rubber coating and an extendable top for storing bits. The two extensions of 75mm and 130mm make it versatile and, to top things off, it has a smooth 38-tooth ratchet. 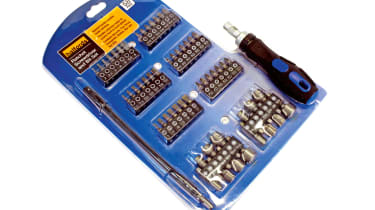 Again, our previous winner leads the way when it comes to how many bits are on offer – a total of 42, plus 14 1/4-inch drive sockets. They are all neatly housed in plastic holders, specific to the type of bit, and clearly marked. However, there are lots of duplicates – notably nine PZ2s – and half the sockets are Imperial, which are rarely used on modern cars. We liked the dual-compound driver handle, although it has just 20 teeth and was a bit clunky. With no case and a price hike of £5 since last time, this set lost enough points to drop a place. 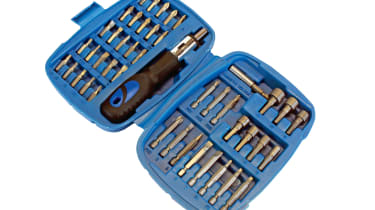 Big numbers for this set, pushing the larger Halfords package hard for the total number of bits supplied, and with fewer duplicates. It also includes 11 50mm bits but oddly – and annoyingly – none are hex. These bits are complemented by seven 1/4-inch drive sockets – from 5mm to 11mm – and all are clearly marked. However, we didn’t think the case was sturdy enough, with plenty of visible flashing and the hinge just a thinner part of the moulding. The driver was coarse, too, with just 10 teeth, but the keen price makes this a great budget buy. 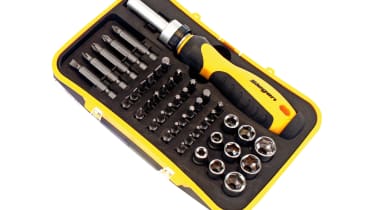 Another set in a nice, strong box, with the contents held firmly in a moulded plastic tray. The selection of bits is good, with only two duplicates, although the heavy bias to Torx and hex leaves just three standard slotted heads. The driver is a handy 170mm long before adding the bits, five of which are 50mm, and the set includes nine sockets covering 5-13mm. However, neither the bits nor the sockets are marked. The driver handle is a tough plastic, with rubberised panels for extra grip but, as with the Halfords ratchet, it only has 20 teeth and felt clunky. 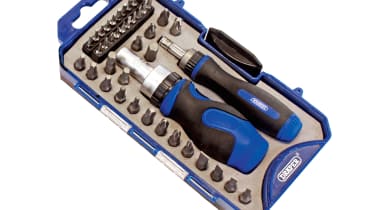 This set is physically smaller than most and comes with two drivers: the 110mm version takes the 1/4-inch bits, and the smaller ones fit the 100mm driver. We liked the grippy handles and the smooth tops that unscrew for extra bit storage, but the smaller bits would be limited to more fiddly jobs, and the driver cried out for a finer ratchet. The bits are contained in two flexible holders and the whole thing is laid out well, but includes no sockets, and no markings to identify each bit. 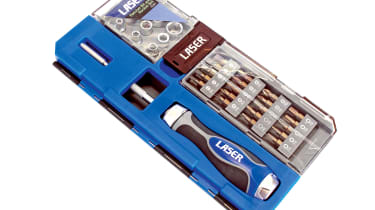 A decent set, very similar to the Sealey, but in an impressive box with three compartments, all locked by one catch. There are plenty of bits, including all our preferred types, plus Pozi. The bits are marked in their spring-loaded holders but, oddly, the 1/4-inch sockets aren’t. We liked the 120mm driver handle with grippy panels, and the two extensions gave plenty of choice, depending on the work in hand. The driver top comes off to store six bits, but what hurts this set is its high price. 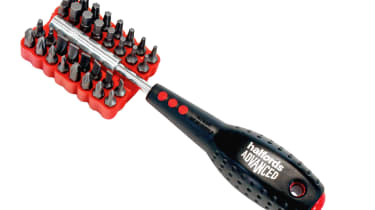 The only package on test without a ratchet driver, although the handle supplied is a good length, at 180mm, and the rubberised coating makes it grippy. With no sockets, the 32 bits fit into a simple plastic holder, with the driver shaft slotted between them. The choice of bits is good and even includes three square bits, but there are no markings. Also, for a set with no case or ratchet, we thought the price was a bit high. 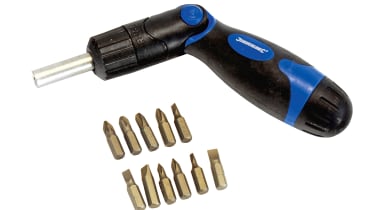 This cheap Silverline set is an enigma, having the lowest number of bits but the best ratchet, with a full 72 teeth. The 12 bits are a mix of slotted, crosshead and Pozi, although there are no Torx or hex. The 210mm driver was plenty long enough and could be locked into one of five angles. While you don’t get a case, the top unscrews for storing the bits, and this set is so small and light that you could keep it in the glovebox.