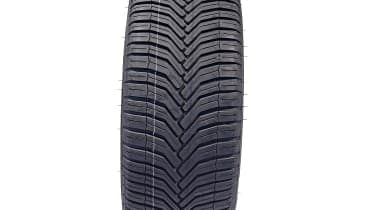 If there was one tyre that would be most affected by our inability to complete the dry handling test, it was this ‘summer tyre with winter capability’.

Michelin has sacrificed outright snow performance to focus on more common wet and dry conditions, but its winter capability is still mightily impressive given the nature of the design and its dry performance – rival engineers have admitted they’re not quite sure how Michelin does it.

There are no grip-boosting sipes in the conventional sense, yet the tyre’s performance on snow was often better than traditional winter-style designs. It was an impressive third at the handling track, with a very stable rear and good traction out of turns on lock – a problem for many tyres. Overall it ranked third on the white stuff, matching the new Goodyear.

That good balance and traction carried over to the wet track, but it was further off the pace than we’ve seen before. Deep water was its biggest drawback, with a poor result in the lateral test hurting its overall score. We can’t wait to try the recently announced third-generation version.

Lacked the wet performance we’ve seen before, but it still starred in the dry and continued to impress on snow.

With more than 8,000 customer reviews for the CrossClimate range and sizes up to 20 inches, these tyres are extremely popular and consistently rated very highly, at 4.7 out of five.