A traditional road map still has its place, and we pick the best from eight choices 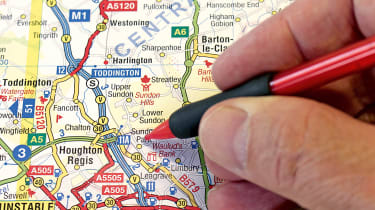 Despite the rise of sat-navs and apps, many drivers still prefer to use paper maps which can’t go wrong or misdirect you. They are also great for seeing the bigger picture ahead of a trip.

The best sizes are A4 or A3, and the bigger options usually work out cheaper per page. But of course the bigger you buy, the more room they take up in storage. A larger scale gives more detail but means more pages and weight.

In general, spiral-bound maps are easier to use since they fold flat, although they’re often not as robust as perfect-bound versions. So which atlas will put you on the right road? We tested eight.

We preferred large scales with more detail, but this was balanced against value, worked out per A4 page (A3 pro-rata). And atlases that listed speed cameras were a plus; even better if they included the limit. We liked clear motorway junctions, with restricted ones listed separately. 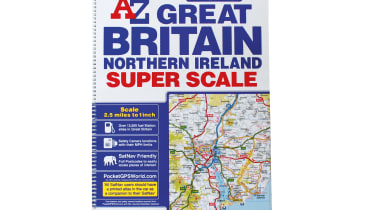 The A-Z has the most pages of our test, offers the best price-per-page ratio and has the most town plans, as well as 16 air and sea ports. It has the joint biggest miles-per-inch scale, so using it was easy, not least the motorway junctions, which were shown on the page rather than separately, and with limited access shown in red. It has safety camera locations and limits on all maps, including the 70 town plans. The proposed roads and hamlets are present, but including just three approach maps is tight, even if London gets eight pages, with the C-Charge area and Ultra-Low Emissions Zone both marked. Tourist info is limited to symbols at the locations but, overall, the A-Z is the best choice. 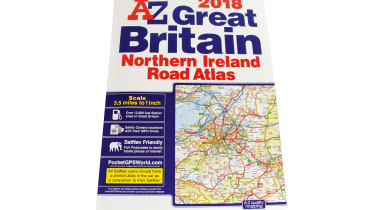 This perfect-bound version mimicked most features of the larger-scale A-Z atlas, such as the speed cameras, points of interest list with postcodes for sat-nav location and very useful locations of 120,000 fuel stations. At just over three pence per adjusted page, the price was near-identical. The town centre, port and airport plans were the same in layout and number, and all our road projects and small hamlets were present. The slightly smaller scale was noticeable but no great hardship, and saved a little weight. 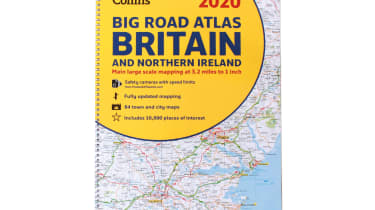 This atlas has fewer pages than its rivals because it uses a slightly smaller scale, although the layout made it easy to use. Our four chosen hamlets were present, but only one of the proposed roads was included. Having to check restricted motorway junctions on a separate page was a bit of a bind, too. We liked the extras such as the comprehensive ferry information, a separate listing of motorway services and a page detailing the riskiest roads. The Collins had six airport plans and the Channel Tunnel, but no sea ports. Speed traps and limits, were present, albeit not on the 64 town plans. 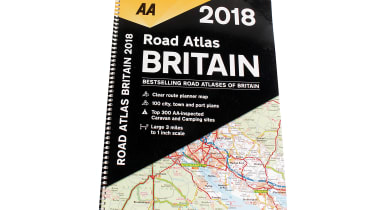 The A4-sized AA map included our three hamlets, the Congestion Charge zone and all four of our new roads – only this and the A-Z publications were able to manage this. It boasted an impressive 80 town plans and all included a street index. Add to this the caravan/camping sites listing and 29 sea, air and Channel Tunnel plans, and the result was comprehensive and went some way to justifying its 4.9p per page price tag, which was the second highest on test. Even without speed camera locations, it came extremely close to ousting the Collins Essential from its place on the podium.

Buy it from The AA here 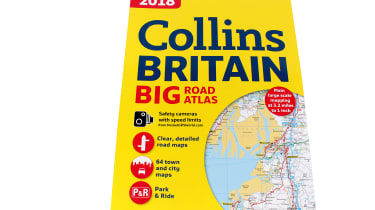 With nice, clear mapping and a good scale, this was close on points with the previous AA, the two closely matched on features. This one did mark out speed traps, but had fewer town plans at 64 and, unlike the Collins A4, there were no indexes. It shared the highest number of approach plans, with 21, and included the Congestion Charge zone. The M25 motorway schematic was useful and six airport plans were reasonable, although there were no sea port plans. Unfortunately, it missed one of our projected roads. 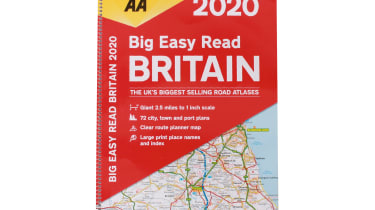 Unsurprisingly, the Britain-only AA atlas is aimed at the motoring tourist, with two pages detailing camping and caravan sites, many roads shown as scenic routes, and a list of tourist sites along with their postcodes. The large 2.5mpi scale gives plenty of detail, the 55 town plans are reasonable and detailing 17 sea ports is very good, although no airports are included. The four hamlets were shown although, like the Collins, only one proposed route was present. Oddly, there are no safety camera locations given; had they been included this would’ve been a four-star product.

Buy it from The AA here 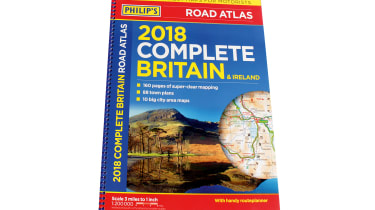 We liked the 3mpi scale and, as ever with Philips, the mapping was clear. We’d have preferred more defined motorway junctions and it’s hard to avoid the price which, at 6.3p per page, was easily the highest we tried. There were no speed cameras, but it beat the rest with a massive 88 town plans, all of which were indexed. J11A on the M1 was shown as completed, but it missed the new road in Wales and the most obvious of our three hamlets. The 10 approach roads were good, although there were no air, Channel Tunnel or port plans.

Buy it from eBay here 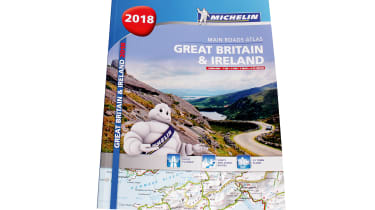 This book covers the UK and Ireland, and while it had the fewest unindexed town plans (41), it was the only one to feature Irish towns. It also had the smallest scale, and missed two hamlets. But it did show three new/planned roads, and M1 J11A as a projection. Aimed at tourists (despite no sea or airport plans), it had instructions in several languages, ‘scenic’ routes and many points of interest.