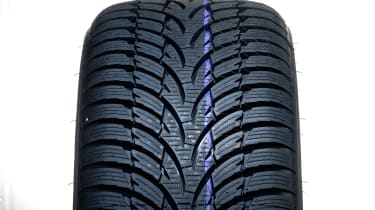 Impressive on snow, but less convincing in the wet and dry.

Reigning champion in this size, Nokian has to be content with third this time in the face of new competition. It was even topped on snow, the Finnish tyre maker’s speciality, by our winner – although admittedly the margins were small.

It was best in braking and second for both traction and cornering, but dropped to third when all were combined on the handling track, a second off the rapid Goodyear. As we have come to expect of Nokian tyres, the grip on snow inspires confidence – but it was less impressive on other surfaces.

Among the other tests, the WR D3 was most effective in deep water, and was close to the pace in the curved aquaplaning assessment. It struggled around the handling circuit, where grip levels were low and the front lacked bite. You also had to wait longer to get on the throttle through turns to avoid running wide.

It was closer to the leaders in the dry, where margins tend to be smaller. It had a good balance on the dry track, although plenty of lock was required when accelerating hard through turns. It felt good, though, and not as soft as some rivals. That firmness hurt it on the noise evaluation, where it was a touch noisier than rivals, particularly on the concrete strips, which led to a joint last place finish. At the pumps, fuel consumption would be just over one per cent more than the best.