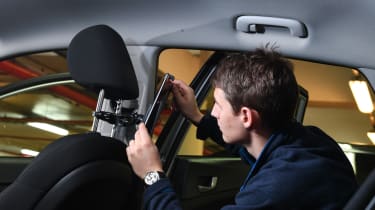 The key to happy back seat passengers is often a screen they can use to watch cartoons, play games and surf the web.

The most accessible screens are tablets, which have become household items for many across the UK, and are now frequently used by passengers, young and old, when travelling in cars.

A headrest holder makes the experience even better, because the device won’t need to be held on someone’s lap. There are many styles, ranging from simple units that can be removed on the go, to heavy-duty models that take time to install. We tested eight to find out which is the best one to take on the next family trip.

We looked for mounts that gripped our tablet tightly and securely in place when fitted in the car. Extra points were awarded if the device could be spun when attached to give the best viewing angle. Ease of use and installation was another priority, while how straightforward it was to remove tablets from the mount was also considered. Prices from online sources was our final factor.

Arkon’s Central Headrest Mount wins thanks to having the best balance of affordability, usability and build quality here. Olixar’s Universal Mount Pro is a former test winner and remains a great choice for families, while Brodit’s heavy duty product is for those who want a device that has been crash-tested. 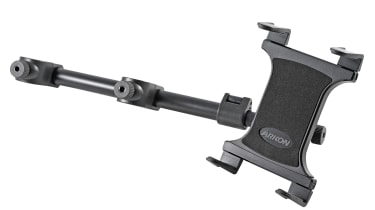 This Arkon mount comes with an easy-to-install set-up. The two locking mechanisms are simple to put into place and we liked the versatility of the holder. It comes with a retractable arm, which means the holder can be extended to the centre of the car, or pulled to one side. This makes it ideal for both single and multiple passengers.

The holder gripped our tablet tightly, with soft padding on all edges and the back plate. Our test device could be spun 360 degrees with lots of room for different viewing angles, too. Speed bumps did result in some movement, but it was acceptable and not enough to prevent the Arkon from taking the honours in this test.

The Pro looks large and complicated, but Olixar’s mount is one of the easier units to install and remove. The two hooks on the metal bar attach quickly and easily between the legs of your headrests. The device holder has lots of padding and can slide from one end of the bar to the other, again making it ideal for single or multiple passengers. It also comes with a lot of manoeuvrability.

That great low price also works in the Olixar’s favour, but the two-seat mounting does have one drawback: The set-up means both the front seats have to be in a similar position to avoid awkward viewing angles. 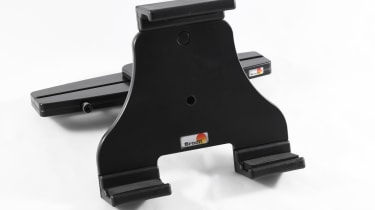 This universal mount from Swedish maker Brodit is sold in two separate parts, and is by far the trickiest to install. It involved both a hex key and a screwdriver, but there’s a reason for this: it’s one of the few tablets on sale that is crash-test certified to EU ECE R17 specification.

The Brodit is expensive and heavy, but if you are after a mount that you know is safe, this is a sound purchase. The holder comes with soft padding to protect your device and it rotates freely. We liked that we could tilt the viewing angle by up to 20 degrees. This is an ideal solution for those comfortable leaving their mount fitted in the car for long periods of time. 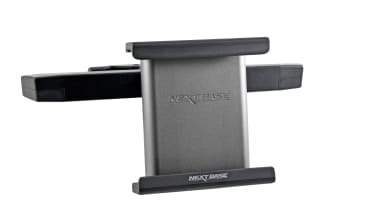 Another heavy-duty device is the Nextbase UniMount. Made by dash cam specialist Nextbase, the UniMount is the second holder in our test that is crash-test certified under the EU ECE R17 standards. It’s slightly easier to install than its rival from Brodit and, crucially, is nearly £40 cheaper, too.

However, there is no manouverability for the tablet, and the holder has no padding to protect the device. We liked how well it scored in our bounce tests: the secure fitting meant that speed bumps won’t affect the screen. Despite its size, our test tablets could still be charged while clipped in place as well. 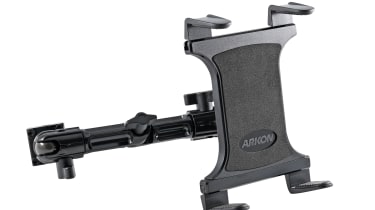 While rival products from Nextbase and Brodit have been crash-test certified, this expensive unit from Arkon hasn’t. Yet it still requires a hex key to install, which takes time. Still, we were very impressed with the Arkon’s manouverability: we could position the mount directly in front of us, or extend it close to the centre of the car. The whole unit also feels like a quality item, with sturdy, hard plastics and a heavy weight to the mount.

The Heavy-Duty uses the same padded tablet holder as the brand’s Central Headrest Mount, so it spins through 360 degrees and can be turned to the left or right for an improved viewing angle.

MyTablet is the cheapest of the three Arkon products on test, and uses the same mechanism to hold the device that’s found in its two sister products. This gives the MyTablet great versatility, and we liked that we could spin the screen in any direction we wanted.

The holder is attached to the headrest via two hooks that are screwed into place. Although this makes it easy to remove, the fixing wasn’t as secure as the other two products from Arkon, making it wobbly on the move. While it is cheaper than our test winner, we’d pay the extra to get more versatility. 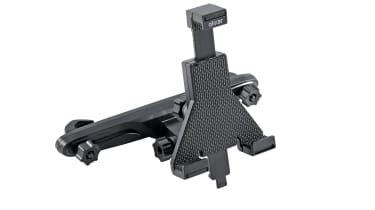 The Universal mount from Olixar was one of the lighter units we tested. It was easy to install, thanks to the simple hook mechanism. The tablet-holding arm spins through 360 degrees and could be tilted left or right to increase visibility. It also featured soft padding on the mechanism that secures the tablet.

However, the build quality could be better, because we noticed some glue stains next to the soft padding. Due to the Universal’s lightweight build, heavier tablets tended to bounce a lot when going over bumps, and the screen grip wasn’t as good as rivals’. 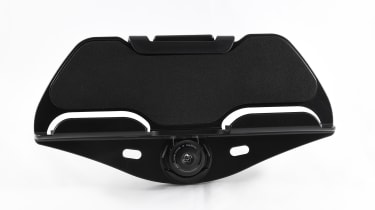 Targus had by far the most interesting design of the mounts on test. To grab the tablet, it uses a plastic unit that is connected to metal wires. To attach the tablet securely to the holder, you spin a knob that tightens the wires until the device is held tightly.

There is a strap with a plastic clip to attach the holder and the tablet to the back of the headrest. This made the Targus the quickest of the mounts we tested to remove when on the go. However, there is no way of adjusting the viewing angle, and the holder wobbled when going over bumps.