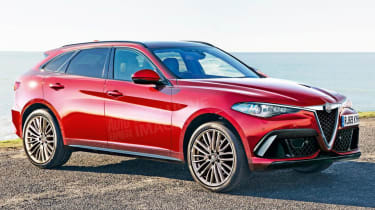 Alfa Romeo bosses have confirmed a new large SUV will spearhead a trio of new models from the Italian brand and it will be the first to usher-in electrified powertrains, Auto Express can reveal.

Based on the same architecture as the Stelvio SUV, development of the new flagship SUV model is already under way. It will be the largest vehicle Alfa Romeo has ever produced and in order for the SUV to retain Alfa’s DNA while meeting stringent emissions levels it will employ a performance-focused mild hybrid setup, which could develop up to 400bhp.

Speaking to Auto Express, Alfa’s Chief technical officer Roberto Fedeli, said: “The Stelvio for sure is an example of Alfa DNA, why don’t we translate that in a car which is a little big bigger? 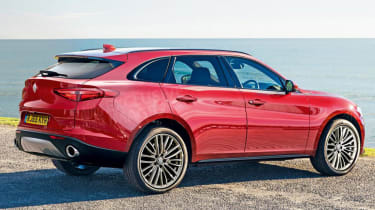 “We have to marry the new car with the right level of electrification. Plug-in hybrid could be a problem for the Alfa DNA point of view, but for instance a 48-volt mild hybrid solution is something that we can do without losing anything,” Fedeli added.

Alfa is prioritizing a larger SUV because of its global appeal and larger profit margins. Fedeli said that the flagship model, previewed by our exclusive images, would gain around 200kg over the Stelvio because of the longer wheelbase and bigger body, but the weight penalty could be offset with an e-turbo system thanks to the use of a mild hybrid powertrain.

“I’m quite happy about the result we have obtained coupling a four-cylinder with the 48-volt e-turbo - I think next time we can also use it in production,” Fedeli told us. “With a 2.0-litre turbo engine you can achieve around 350 to 400bhp. We are driving on a simulator a car like that, we are working on it, and the result is not so bad,” he added.

The large SUV is still around two years away from hitting the market and is likely to be offered with a seven-seat layout in order to make it more competitive against models Alfa is benchmarking such as the Audi Q7 and Volvo XC90.

A replacement for the Giulietta hatchback will follow the new Audi Q7 rival, while Alfa bosses are also weighing up whether to completely reinvent the Alfa 4C for its next generation with a new chassis architecture and engine.

Are you excited by the prospect of a large SUV from Alfa Romeo? Let us know what you think in the comments…