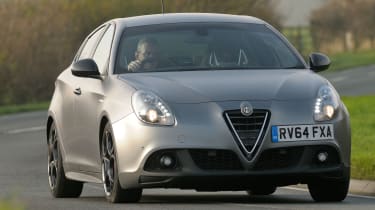 The QV (or Cloverleaf) is the high-performance hot hatch version of the gorgeuous Alfa Romeo Giulietta. Pitched against rivals like the Ford Focus ST, Renaultsport Megane and VW Golf GTI, it packs a 237bhp turbocharged 1.75-litre petrol engine into a gorgeous five-door body. But performance and handling are not quite on a par with its most accomplished rivals, leaving the Cloverleaf feeling more like a fast upmarket hatchback than an out-and-out hot hatch. Following a 2014 update, the Giulietta QV is now only available with a sluggish dual-clutch automatic gearbox – making this a car for style-conscious buyers who like to be different, even if that means they're not behind the wheel of the class leader.

Front-wheel-drive performance cars have been getting better and better in recent years – not that long ago, 237bhp going to the front wheels would have been a recipe for handling disaster. Yet the Alfa handles its power reasonably well, with good turn-in, not much body roll and fairly responsive steering. 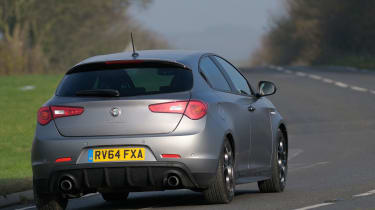 Disappointingly, though, it doesn't feel quite as fast as its power figure would suggest and the overall driving experience is nowhere near as exciting as a Renaultsport Megane. It's made worse by the fact it's now only available with an automatic gearbox, which despite being a dual-clutch affair, is some way off the pace compared to VW's DSG. The big wheels on the QV version make it a tiring long-distance compainion, while the big bucket seats restrict rear visibility.

Alfa Romeo claims the Giulietta Cloverleaf's turbocharged engine offers the performance of a 3.0-litre with the fuel economy of a 1.8-litre. It will return a claimed 40.4mpg in mixed urban/motorway driving, while 162g/km CO2 emissions put it in tax band G, which considerably higher than most its main rivals. Those attracted to the Giulietta for its style and practicality will be better off in the more economical diesel or 1.4-litre turbo petrol versions of the car.

Italian cars can always be counted on to turn heads, and the Alfa Romeo Giulietta doesn't disappoint. The quirky, elongated rear light clusters are the most obvious feature, but other touches like the hidden rear door handles, handsome curving window line, bright silver wing mirrors and neat front end combine to make this the most elegant family hatch you can buy. It looks best in red, of course, though a 2014 update brought an optional matte grey shade, making it stand out from the crows even more. Inside, it's just as impressive, with bold shrouded dials and smoothly integrated air vents pushing the Alfa ahead of humdrum rivals like the VW Golf in the cabin style stakes.

The Giulietta QV is only available as a five-door, so compares favourably with rivals when it comes to practicality. There's plenty of room in the back for adult occupants and the 350-litre boot is only slightly smaller than that of a VW Golf – though a high boot lip in the Alfa limits its load-lugging ability. 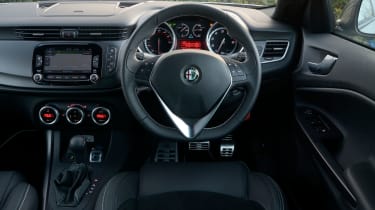 Comfortable sculpted sports seats keep driver and passenger in place during spirited driving, and there's a decent amoung of cup-holders and storage cubbies dotted around the cabin. Overall, the Giulietta is proof that eye-catching looks and heart-stirring performance need not come at the expense of day-to-day practicality.

Alfa Romeo quality has come on in leaps and bound since the dark days of the eighties and nineties. That old reputation is proving hard to shake, however. There have been no recalls for the Giulietta yet, but some aspects of interior quality are disappointing, with cheap, Fiat-sourced plastics appearing in places. The Giulietta did well in the 2013 survey, but dropped 69 places to finish 76th in 2014. While that's not a bad score, the Alfa Romeo brand placed a below-average 21st out of 33 manufacturers. The QV scores well for safety, with standard ESP and twin airbags, plus a maximum five-star crash-test rating from Euro NCAP. 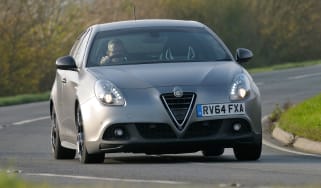 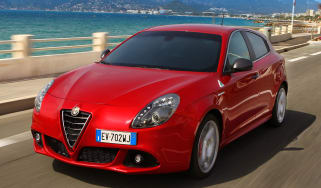 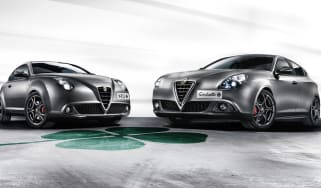 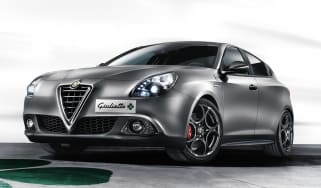 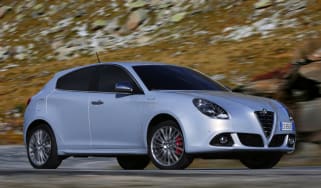 A new Alfa Romeo Giulietta could use the all-aluminium engine from the 4C coupe
Blog: Taking your racing driving test 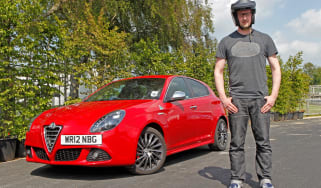