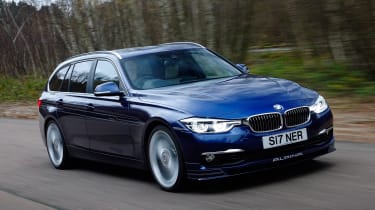 The D3 Bi-Turbo Touring is one of the best all-round performance cars you can buy. It’s as close as you’ll get to an M3 Touring, although it delivers its performance in a more refined manner than BMW’s lairy M car. The rear-drive chassis is sharp and responsive, yet the ride is so well resolved that your passengers will barely notice the bigger wheels. Add in excellent real-world economy, and this Alpina is a gem of a sports car.

German tuning firm Alpina has more than 50 years of experience making fast BMWs even faster. In fact, it’s so well respected that its cars are fully endorsed by BMW – you can get them serviced at any dealer – plus it has access to the newest models sooner than many rival tuners.

As a result, it has just launched its updated D3 Bi-Turbo, which is based on BMW’s facelifted 3 Series. That means you get new LED daytime running lights, plus Alpina’s bodykit and 19 or 20-inch wheels, which give the D3 a purposeful look. Pinstripe logos are optional. 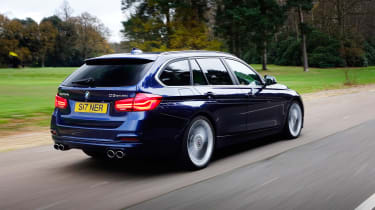 Inside, Alpina has ditched the small gearchange buttons it normally fits to the back of the steering wheel and retained the standard car’s paddles to operate the eight-speed Switchtronic auto gearbox.

Under the skin, the car uses the 3.0-litre twin-turbo diesel from the 335d, although Alpina has uprated it with new air intakes and a larger intercooler to boost power to 345bhp and raise torque to 700Nm. All that extra power is good, but perhaps more significantly, the D3 is rear-wheel drive – whereas BMW’s 335d is now only offered with xDrive 4WD. 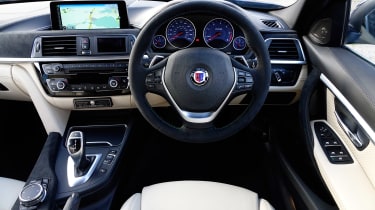 In reality, the Alpina has plenty of grip and a very effective traction control system, as it’s only in the wet where you would need the added security of four-wheel drive. In a straight line, the D3 is astonishingly fast, with in-gear response to match some supercars. In fact, a claimed 0-62mph time of 4.6 seconds is only three-tenths slower than the BMW M3. But take it easy, and this diesel sports car can return 50mpg economy.

As well as being fast, the D3 Bi-Turbo is hugely capable in corners. With plenty of grip on offer, very little body roll and communicative steering, it handles with the precision and accuracy of a small sports car – making it easy to drive quickly on twisting back roads. Yet the Alpina is also a capable cruiser, and even when it’s fitted with 20-inch wheels, only the biggest potholes will unsettle the ride. 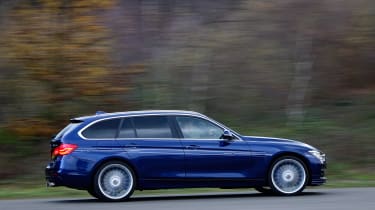 If you go for the Touring estate body, you’ll have a practical family wagon with a 495-litre boot, which is more than enough space for most needs. Add in a plush interior with some bespoke Alpina touches and a long list of standard kit, and the Bi-Turbo is one of the most accomplished all-round sports cars you can buy. It’s just an added bonus that your whole family can enjoy it, too.