Could the Alpina D3 be the perfect everyday car? Quite possibly. Strong fuel economy and effortless usability combine with scorching mid-range punch, excellent refinement and precise handling to deliver the best of both worlds whenever and wherever you want it.

They do things differently at Alpina. Always have done and, hopefully, always will do. Which is why the D3 you see here is such an intriguing car to run day in, day out – because it really does do some things that you categorically don’t expect from a model with a turbodiesel engine pumping away beneath its bonnet.

In its own individual way, the car draws a particular kind of admiration from people who know what it is, and think they understand what it can do. In reality, though, nothing can prepare you for what the D3 feels like to drive. Its 3.0-litre twin-turbo engine produces so much torque, which in turn provides it with such a huge hit of mid-range acceleration, that most people who travel in it can’t believe what’s happening to begin with. 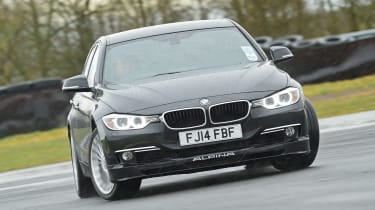 Even on half throttle it has enough performance to deal with most other cars on the road. And at full throttle, especially in fourth or fifth gear when the full 700Nm is unleashed, it can stay with pretty much anything, including BMW’s own M3. Which is quite something considering it’ll also return 40-45mpg on most journeys, with only occasional forays down into the high 30s if it’s driven really hard for long periods of time at considerable speed.

Yet the flipside to running the D3 every day is how practical and civilised it feels when I dial everything back to Comfort and just use it as if it were any other 3 Series. Then, it transforms itself into one of the most easy-going cars you could ever wish to live with, featuring a beautifully relaxed ride quality, light and easy electric power-steering and a perfectly behaved eight-speed semi-automatic gearbox. 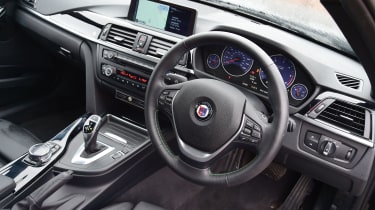 It also features one of the best cabins in the business – one that happens to have two of the most soothingly comfortable front seats you’ll ever nestle your backside upon.

It’s easy to get carried away with the options list on Alpinas. Some of the leathers offered from the factory are delicious to the touch and exquisite on the nose, but they can cost many thousands of pounds extra. But this particular D3 has what I’d describe as the only options you’d ever want: the so-called Professional Navigation system, a few extra bits and bobs inside and out, plus a limited-slip differential. Depending on how you look at it, this gives the D3 plenty of agility – or a hooligan streak. 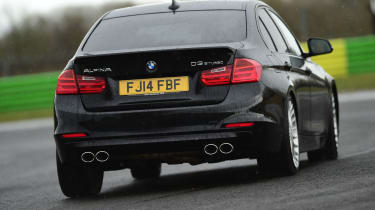 As you can see from the photo opposite, combined with the Alpina engine’s huge amount of torque, you can drive the car hard and adjust its cornering line using the throttle. It’s still nicely balanced in everyday driving, though, and feels perfectly safe, with lots of grip from the sticky Michelin tyres.

Total on-the-road cost of the standard car is £46,950, but with the above options our D3 comes to £54,440. And at that price it has to represent one of the most compelling bargains of the moment among the world of high-performance saloons, even if its diesel engine doesn’t produce as good a soundtrack as a factory M3. 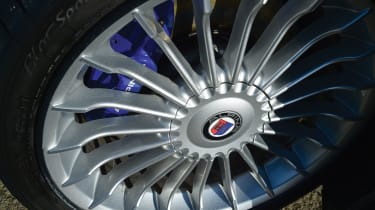 So far, after just over 7,500 miles, not a thing has gone wrong with our car. I’ve also had some Alloy Gators fitted to prevent those lovely 19-inch wheels from being kerbed. The Gators cost £180 including fitting, which is an awful lot less than it would be to refurb one of those rims if the unthinkable happened.

“Subtle but effective alterations to the Alpina D3 give this diesel supersaloon some extra on-road presence over the standard BMW 3 Series on which it’s based. It gets four fat tailpipes, hinting at the extra performance from the twin-turbodiesel. Alpina’s trademark multi-spoke wheels look chunky and are complemented by a deeper front bumper and small bootlip spoiler. If you want your D3 to shine a bit more brightly, there’s an optional graphics pack, too.”