The Alpina D3 is a tuned BMW 3 Series, we see if it's any good 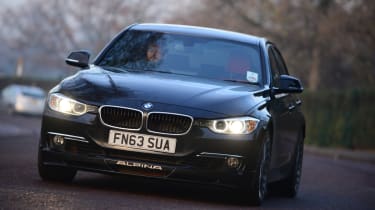 The Alpina D3 is £5,435 more than a four-wheel-drive BMW 335d, with prices from £46,950 (or £49,950 for the Touring), but we think it’s money well spent. While it can’t match the drama of the petrol-powered B3 (although the incredible fuel economy makes up for that), it’s still sharp to drive, incredibly fast and comfortable enough for everyday duties.

The Alpina D3 is proof that supersaloons can run on diesel as well as petrol. With 345bhp and 700Nm of torque, it charges from 0-62mph in 4.6 seconds and hits a 173mph top speed, making it the fastest diesel production car in the world. Drive it cautiously, though, and it promises 53.3mpg economy and 139g/km of CO2.

You may remember we drove the Alpina B3 Bi-Turbo in Issue 1,287. Based on the BMW 335i, but powered by a tuned 404bhp twin-turbo 3.0-litre straight-six, it’s a more laid-back alternative to the new M3.

The D3 Bi-Turbo follows a similar formula, honed using Alpina’s 50 years of BMW tuning experience, by pumping up the 335d’s performance, tweaking the chassis and styling, but making comfort and refinement a priority.

By swapping the 335d’s single turbo for two smaller turbos, plus enlarging the intercooler and air intakes and fitting a special ECU, Alpina has hiked power by 32bhp and, crucially, torque by 70Nm.

The result is an initial hit of acceleration that even the new M3 would struggle to live with over the first 50 metres. Yet it’s not all about flat-out acceleration – with its sweet engine note and surprisingly free-revving character, this engine is a joy to use whether you’re cruising or attacking.

The gearbox – a development of BMW’s eight-speed auto with 20 per cent of the parts replaced – is also a joy. It kicks down fast to put you in the powerband, and shifts with barely any interruption to the torque. We only wish there were conventional paddles for shifting manually, rather than the fiddly ‘nipples’ on the wheel.

But Alpina’s work extends beyond the amazing powertrain. The quadruple Akrapovic exhausts look great, and help the engine breathe more easily, while the suspension gets all-new springs and retuned four-stage adaptive dampers. Tuned for softer compression, but stiffer rebound, it means the D3 ride feels marginally plusher than the standard 335d’s, but body control is excellent and even over bumps the wheels stay glued to the road.

With all that torque clawing at the rear tyres, it’s happy to break traction in Sport+ mode (which loosens the ESP’s grip), while the steering hasn’t lost its crispness in the transition from BMW to Alpina. Plus, the uprated Brembo brakes provide huge stopping power.

Styling changes are typically subtle, but work well. Besides the wheels and those aggressive quad tailpipes, there’s Alpina lettering on the front splitter, as well as a pert bootlip spoiler.

The interior feels like any other well specced BMW’s, apart from the smattering of Alpina badges and a plaque displaying the car’s position in the production run. But the real key to the brand’s success is that it only develops one specification for each model – one type of seat, one level of equipment, one size of alloys and one suspension set-up.

So its team of 50 engineers can focus on perfecting the set-up, rather than allowing for variation with bigger wheels and different suspension. That’s why the Alpina D3 manages to be blindingly fast but comfortable, and exotic but understated, all at the same time.