Aston Martin is going straight from victory at the 24h of Le Mans to the ’24 Seconds of L’Ally Pally’ in the Red Bull Soapbox Race. 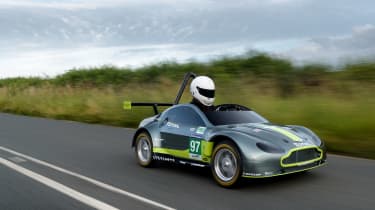 Off the back of its GTE Pro class success at the famous Le Mans 24-Hour endurance race, Aston Martin Racing is developing a brand-new race car to compete at a slightly less prestigious but equally competitive event this weekend; the Red Bull Soapbox Race.

The Le Mans-winning V8 Vantage GTE has been re-imagined as a smaller, engineless and possibly cardboard go-kart to compete in the London edition of the Red Bull go-kart race series at Alexandra Palace.

Aston Martin has taken the engineering insight and race strategy learnings it gained at the world’s most famous endurance sports car race back in June and channelled them straight back into this Aston Martin Vantage GTE go-kart. 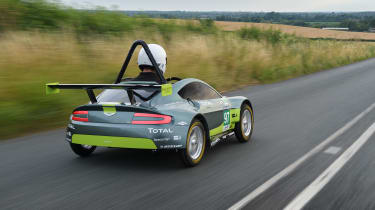 Aston says this is officially the marque’s most efficient car in its 104-year history as it uses no fuel at all and runs purely on the force of gravity. Given Aston Martin’s pedigree in hill climbs dating back to its inception in 1913, the reasoning is that its engineers should have no problem building a go-kart to come back down the hill and take glory.

Pilot and engineer Alex Summers will also be getting some help from British Le Mans winners Darren Turner & Jonny Adam at the event with the pair providing invaluable tips on how to drive to victory.

However, speed is not the only category for success in the Red Bull Soapbox Race, as creativity of design will also be taken into account and Aston is confident that the sleek lines of its Vantage sports coupe can out-class the shed-built competition.

There will be no familiar wail of V8 or V12 power from an Aston Martin engine, but we can still imagine the wave of fear that will sweep over homemade go-kart owners as the Aston Martin works team wheel their high-tech creation up to the start line.

What do you think of the Aston Martin go-kart? Let us know if you've built better in the comments...