Aston Martin has unveiled a re-trimmed version of the Airbus ACH130, designed to fill a niche in the brand's luxury product portfolio 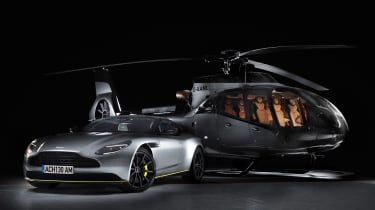 Aston Martin has teamed up with Airbus to produce its first helicopter, which is intended to fill a niche in the British firm’s ever-expanding range of luxury products. It’s essentially a re-trimmed and re-painted version of the Airbus ACH130 lightweight single-rotor passenger helicopter, which draws on Aston Martin’s range of sports cars for styling inspiration.

Mechanically, the ACH130 Aston Martin Edition is identical to the standard Airbus helicopter, but its bodywork and interior features have been created by the Aston Martin design team.

The helicopter’s panelling can be painted in one of four Aston Martin colours, including Xenon Grey, Arizona Bronze, Ultramarine Black and a unique Stirling Green livery. The rotor cowling of each model also sports a unique serial number, suffixed with Aston Martin Lagonda’s initials. 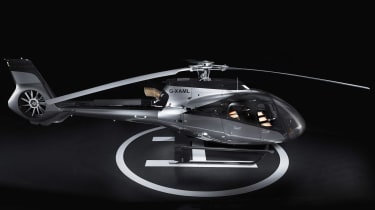 Cabin components such as the seat frames, seat foam, safety harnesses and flight controls are identical to the standard ACH130’s, to keep the helicopter compliant with air safety regulations. However, the rest of the cockpit has been completely reupholstered in the same blend of carpet, leather and microsuede as the Valkyrie.

The front row seat backs feature the same carbon fibre and brogue detailing as the Aston Martin DB11, along with a unique set of leather saddle bags. The helicopter’s instrument panel is also fitted with a plaque, detailing the helicopter’s registration number.

Over the 12 months, Aston has adopted an aggressive product expansion strategy, launching the Valkyrie hypercar and the DBX SUV, as well as a limited edition motorcycle (built in collaboration with Brough Superior) and an apartment complex in Miami. Aston Martin hopes this latest project will allow it to cover most of the luxury sector.

Prices for the ACH130 Aston Martin Edition are strictly by application, but as a guide, the standard helicopter is priced from around £2.4 million. However, according to Aston Martin’s design boss, Marek Reichmann, this figure is unlikely to deter the helicopter’s target market.

Reichmann said: “Buyers of the standard ACH130 are the same as our Valkyrie buyers, or buyers of our limited edition Zagato models. We don’t build cars that are necessary or needed – we build cars that are desired. And, like our cars, this is targeted at the sector of society which can afford that desire.”

What do you make of the ACH130 Aston Martin Edition helicopter? Let us know in the comments section below…