Unloved Cygnet city car gets Vantage makeover with V8 power and wider track, all for one Aston customer 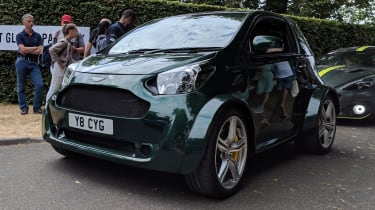 Aston Martin will arrive at the 2018 Goodwood Festival of Speed with not one, but two all-new cars set to take on the famous hillclimb.

Joining the all-new 715bhp DBS Superleggera flagship will be a one-off Cygnet commissioned though Aston’s Q customisation service, which the firm has dubbed ‘the ultimate city car’.

Produced at the behest of one of Aston’s customers, the V8 Cygnet struggles to hide its new powertrain – a 4.7-litre, 430bhp V8 lifted from the previous-generation Vantage S. 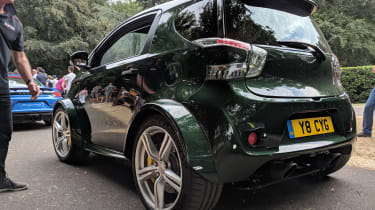 The new engine is a full 3.4-litres larger than the four-cylinder unit equipped under the bonnet of the original Cygnet. Produced from 2011 to 2013, the Toyota iQ based city car was used by Aston to comply with European Union fleet emissions regulations, and produced just 97bhp.

With 333bhp extra on board, Aston Martin claims that the V8 Cygnet is capable of 0-62mph in 4.2 seconds – faster than the outgoing V8 Vantage S. Top speed has been clocked at 170mph.

To accommodate the new engine, both a new front bulkhead and transmission tunnel have been fabricated from sheet metal, while the subframes and suspension are partly shared with the previous generation Vantage too.

So too is the gearbox. It’s a seven-speed Sportshift II transmission, sending power to the rear wheels through a tiny torque tube. Throw in a full roll cage and a new twin-exit exhaust system, and the V8 Cygnet tips the scales at 1,375kg. 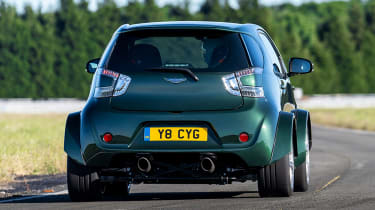 Elsewhere, the visibly wider track front and rear is bookended by new 19-inch alloy wheels, sitting over new 380mm brake discs at the front, and 330mm pieces at the rear.

In the cabin, fixed back carbon-fibre Recaro bucket seats are found, complete with four-point harnesses. A removable steering wheel makes the cut too, and sits in front of an instrument binnacle lifted from the Vantage.

Is the V8 Cygnet the best thing to hit the Goodwood Festival of Speed? Check out the other cars at this year’s show, and decide for yourself…