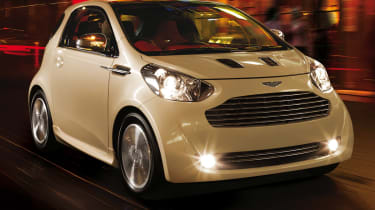 The Aston Martin Cygnet is based on the Toyota iQ city car, but comes with a completely redesigned body and a hand-crafted interior. According to Aston Martin it takes the team 150 hours to create a Cygnet, and the impressive quality can be seen in the hand-stitched leather interior. Unfortunately the way the Cygnet drives lets it down, and there's a hugely expensive price tag, which makes it incredibly difficult to justify buying a Cygnet. If only Aston had made further changes to the handling and engine of this city car, then it may have been easier to recommend.

The Cygnet is powered by the same 1.33-litre petrol engine that's found in the Toyota iQ. Performance is identical too, which means that there's plenty of performance for driving around town, but you may struggle to keep up with fast-flowing traffic on the motorway – not a complaint you can normally make of an Aston Martin. On the plus side, the Cygnet is incredibly easy to drive around town because of its compact footprint. A CVT automatic gearbox is available as an option, but it's noisy and best avoided unless you prefer the ease of an auto.

As far as city cars go the Cygnet is far from the cheapest to run but CO2 emissions of 116g/km put it in one of the lowest tax brackets, while fuel economy of 57mpg should ensure that your trips to the petrol station aren't too regular. Anyone who can afford to buy a Cygnet won't be too concerned about servicing costs and the like, but with its Toyota iQ underpinnings there won't be any hefty bills to worry about anyway.

There's nothing else on the road that looks like an Aston Martin Cygnet. It's got the proportions of a city car but the styling of one of Aston's supercars, including the wide chrome grille and boomerang tail-lights. The interior is hand finished with the finest leather and Alcantara, which is where the Cygnet attempts to justify its astronomical price tag.

Theoretically you're supposed to be able to fit four people in an Aston Martin Cygnet, but it will definitely be a squeeze if you attempt it. The generously padded leather seats have cut rear legroom even more than in a Toyota iQ, and while boot space remains identical, there's only really enough space to carry a day's worth of shopping.

The engine and electricals have proved themselves in the Toyota iQ, and Aston Martin has thankfully left them untouched. That means there should be very little that goes wrong, and even if it does, Aston Martin's customer service team will ensure it's fixed as soon as possible. Safety should impressive as the iQ scored five stars from Euro NCAP. That's partly down to the curtain and knee airbags that are included as standard. 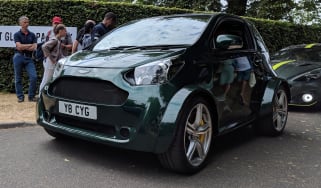 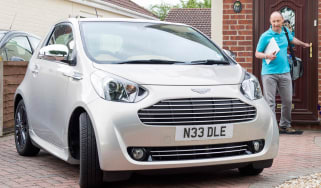