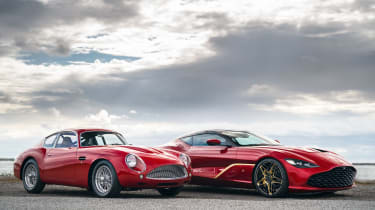 The collection consists of a coachbuilt variant of the DBS Superleggera (commissioned by Zagato) and a track-only, continuation version of the classic DB4 Zagato. Production is limited to just 19 pairs, priced at £6 million each.

The DBS GT Zagato takes inspiration from the original 1960 DB4 GT Zagato, replicating its cab-rearward shape and curved roofline. The roof  – featuring Zagato’s iconic double-bubble design – is a single continuous carbon fibre panel and does without a rear window. To compensate for the poor rear visibility, there’s a rear-view camera. 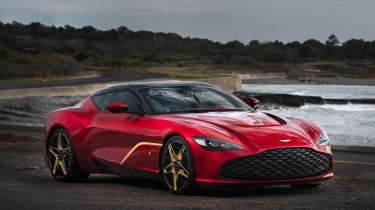 Stand out exterior design features include a set of satin black and gold 21-inch alloy wheels, gold anodised side strakes and 18-carat gold wing badges for the car’s nose and tail. There’s a new front splitter, a fresh carbon fibre diffuser, an updated exhaust system and a new rear bumper with a pair of unique light units.

The DBS GT Zagato’s front grille is also unique to the vehicle. It’s made from 108 separate carbon fibre elements, which sit flush with the bodywork when the car’s engine is switched off. Firing up the DBS GT’s motor causes each of the pieces to flutter into their open position, to allow cooling for the engine.

The GT Zagato is powered by a twin-turbocharged 5.2-litre V12 engine, producing 760bhp and 900Nm of torque – more than enough grunt for a top speed in excess of 200mph according to Aston’s claims. Power is fed to the rear wheels via an eight-speed automatic gearbox. 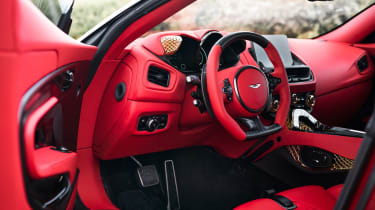 Inside, the DBS GT features unique Zagato seat upholstery, a carbon-fibre trimmed steering wheel and carbon fibre shift paddles. It also has a range of 3D-printed trim components on its dashboard and centre console, available in carbon fibre, aluminium or (as shown by the example pictured here) gold-coloured stainless steel.

The Aston Martin DB4 GT Zagato is the inseparable counterpart to the DBS GT Zagato, with the pair only being sold as a duo. Much like the British marque’s DB4 GT Continuation model, it will be a brand-new version of the original sixties car.

It’s built using a combination of yesteryear craftsmanship and modern-day technology, with its hand-beaten body being checked against a digital scan of an original DB4 GT Zagato. Aston Martin has also modernised the car’s underpinnings with a new tubular chassis and a contemporary suspension system.

The DB4 GT Zagato Continuation will be powered by a reworked version of the same Tadek Marek-designed 4.2-litre twin-spark straight-six petrol engine from the DB4 GT Continuation. Aston Martin claims a power figure of 380bhp – all of which will be sent to the rear wheels via a four-speed manual transmission and a limited-slip differential.

All 19 Aston Martin DB4 GT Zagato Continuation models will be assembled at the brand’s Heritage Division headquarters in Newport Pagnell, with deliveries to customers by the end of the year. Production of the DBS GT Zagato will begin next year, with the first cars reaching customers in late 2020.

What are your thoughts on the new Aston Martin Centenary Collection? Let us know in the comments section below…