The new Aston Martin Rapide AMR gets 43bhp more than the Rapide S, and will be limited to just 210 examples 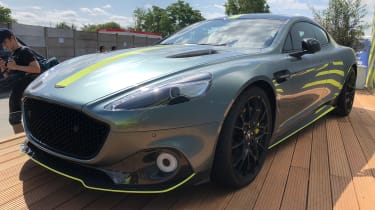 This is the new Aston Martin Rapide AMR, the fastest version of the four-door coupe you can buy. Only 210 examples will be produced each priced from £194,950.

Upgrades to the 6.0-litre V12, similar to those first seen on the Vantage GT12, consist of an enlarged inlet manifold, revised engine mapping, and a quad tailpipe setup to liberate more vocal roar.

The result is a 43bhp increase over the Rapide S. That takes the total to 595bhp, while peak torque is unchanged at 630Nm. Channelled to the rear wheels through a carbon propellor shaft and an eight-speed automatic gearbox, the AMR covers the 0-60mph dash in 4.2 seconds on its way to a 205mph top speed. 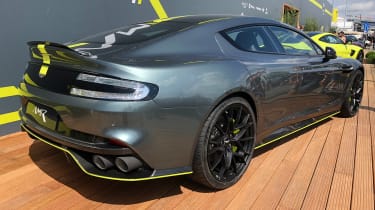 That’s only 2mph more than the S, but the tweaks aren’t just about straight line performance. A new front splitter, deeper side skirts, an aggressive rear diffuser and small lip spoiler - all made from carbon fibre - reduce lift. The bonnet is made from the same material, and there’s the option to finish the mirror caps, side strakes, door handles, tail light surrounds and even the badges in carbon, too. Despite the extensive use of the lightweight material, Aston Martin states the official kerb weight at 1,990kg - identical to that of the Rapide S.

Further styling changes include a reshaped grille filled with black mesh, and a reshaped bumper which houses a pair of round LED daytime running lights inspired by the Zagato Vanquish.

The suspension is also more focused. Ride height has dropped 10mm compared to the S, while the three stage adaptive dampers have been returned to match. 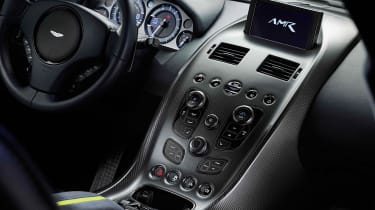 The Silhouette does without the lime, instead getting a full-length stripe available in either grey or white. Finally the Signature model makes a nod to Aston Martin Racing’s colour scheme, by combining the accents, body stripe and brake calipers - all in lime - with a Stirling Green paint finish.

The flashes of lime are available inside too. The alcantara upholstery features stitching and seat and roof accents in the same shade - though a more subdued silver finish is also available. The seat backs feature stitched-in AMR logos and a carbon fibre centre console, with optional extras including carbon fibre paddle shifters, a 1000-watt Bang & Olufsen sound system and a steering wheel in a similar design to that of the One-77 hypercar.

Do you like the look of the new Aston Martin Rapide AMR? Let us know below...