Only 99 Aston Martin Vanquish Zagato coupes will be built, but we've got our hands on one of them. Is it worth the £525k asking price? 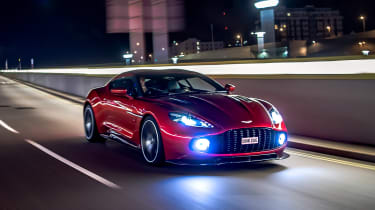 Lots of little changes add up to make this the best Aston Martin Vanquish we’ve ever driven. Sadly it is also the most expensive – and with just 99 being produced it is a car available only to a lucky few. It stands out and catches the eye more than you might think, and the deeply engaging driving experience is something that the new breed of Mercedes-infused Astons would do well to keep in mind.

Aston Martin has a long history of producing special editions in association with the Italian coachbuilder Zagato. It all began in 1960 with a lighter, more aerodynamic version of the DB4GT and, via ‘Z’ versions of the V8, DB7 and V12 Vantage. But now there is this: the Vanquish Zagato.

It was launched at the Villa d’Este concours in Italy last year and subsequently convertible, speedster and shooting brake variants have also been unveiled. With just 99 coupes being produced, it is an extremely exclusive car that we’re very lucky to get our hands on.

The dramatic skin is all carbon fibre, just like the Vanquish that it is based on. However, there are fewer pieces of carbon fibre making up the overall shape, and if you look closely you’ll notice the consequent lack of joins in the bodywork, particularly at the rear of the car. 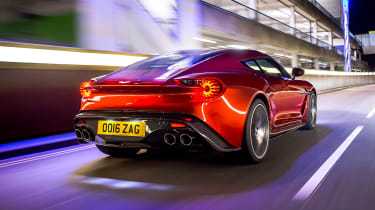 Marek Reichman, Aston Martin’s Chief Creative Officer, claims that the Zagato’s design is intended to give the car the feeling of a piece of daring high fashion. It certainly stands out, with its trademark ‘double bubble’ roof, drooping bonnet line and incredibly sculptural rear that has elements of the wild Vulcan track car.

Customers can also order their cars with a special Villa d’Este pack that picks out the badges, side strakes and wheel spokes in gold. This golden theme can be seen (as standard) inside the car, where vents and bits of switchgear are picked out in the same colour. The seats also get special stitching with a ‘Z’ theme to it.

Push the key into the dash and you’re firing up the same 5.9-litre V12 as you find in the Vanquish S. Power and torque figures are the same as the S too, with the naturally-aspirated powerplant producing 595bhp and 630Nm of torque. This is more than enough for the car’s pace to live up to the looks, covering 0-60mph in just 3.5 seconds. 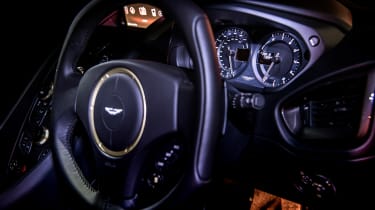 Perhaps more importantly, the Zagato has a soundtrack to match its dramatic exterior. With a more open exhaust, the glorious noise filling the cabin is appreciably greater in volume. The ride is also firmer and although it’s not uncomfortable, it pushes the Vanquish Zagato a little further away from the GT end of the spectrum and more towards the sort of car that you want to drive when you reach some interesting roads.

And you really will want to drive it. The changes might seem incremental, but add them all up and the car as a whole feels tremendous. Well weighted steering, a responsive chassis and taut suspension all combine to make the Zagato wonderfully involving. Given the more sporting nature of the car, it’s perhaps no surprise that the eight-speed, paddle-operated auto ‘box feels a little out of its depth at times. It certainly doesn’t ruin the experience, however.

At £525,000 (before options) the Vanquish Zagato has a price more than double that of the already very handsome Vanquish S, so some may question its value. But after spending some time around the Zagato it is clear that it really does feel a cut above.