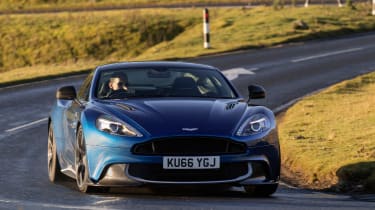 This is it: the last hurrah for the Aston Martin 6.0-litre V12 and the end of an era. Once the Vanquish S disappears from the stock list, the naturally aspirated 12-cylinder Aston will be no more. Soon, the flagship will be lowered to half-mast.

The original Vanquish dates back to 2001 with the launch of a car developed from the Project Vantage concept of 1998. Aston’s new flagship was thrust into the limelight, making a starring role as James Bond’s car of choice in the 2002 film, Die Another Day.

Just 1,489 examples of the 460bhp Vanquish were built before it was replaced by the more powerful Vanquish S in 2005. With an extra 60bhp, the Vanquish S was good for a quoted top speed in excess of 200mph, making it one of the fastest Aston Martin road cars ever built. 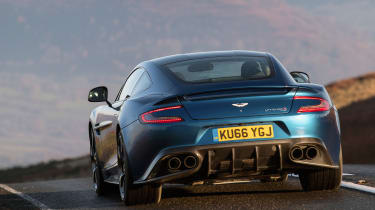 As a flagship, the Vanquish wasn’t lacking in glamour and prestige, helped in no small part by the 007 connection, but it was dogged by reliability issues, while the interior wasn’t a strong point. It died in 2007, along with the old Newport Pagnell factory.

The new and current Vanquish debuted in 2012, with styling influenced by the One-77 hypercar. A year later, it was joined by the Volante – the first Vanquish drop-top – before the S was unveiled in 2016.

It remains a thoroughly old-school Aston Martin, especially in light of the turbocharged DB11 – but this run-out special is far more than a cosmetic exercise.

For the Vanquish S, Aston has squeezed a further 27bhp from the 6.0-litre engine. That boosts power to 595bhp, while torque remains unchanged at 630Nm. The eight-speed transmission has been tweaked to provide quicker shift times, while the suspension, damper internals, spring rates and anti-roll bar bushes have been retuned. 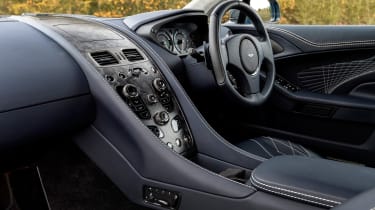 Two versions are available – the Coupe and the Volante convertible – with prices starting just shy of £200,000. There are no trim levels, but buyers will be encouraged to splash out on a range of new options, such as carbon fibre bonnet louvres, five-spoke diamond turned wheels and ‘Filograph’ quilted leather.

It isn’t the quickest or most sophisticated luxury GT on the market, and at £200,000 before options, it isn’t the cheapest, either. But in terms of pure theatre and brutish performance, the Aston Martin Vanquish S makes for a fitting swansong for what has become a British institution. This is a landmark car: the curtain-call for the naturally aspirated 6.0-litre V12, with Aston embarking on a new Mercedes-influenced future: starting with the DB11.

For an additional £12,000, Aston will lower the roof to create the Vanquish Volante S, giving even greater access to that howling 12-cylinder soundtrack. The Vanquish S is far from perfect, but this is brilliant take on a now old-school super-GT formula.

The Vanquish S is more soft-focus than hardcore, but the 6.0 V12 engine remains brilliant

Few cars deliver a greater sense of theatre than an Aston Martin V12. Insert the key fob into the centre console and the 12-cylinder engine bursts into life with a metallic howl, before settling down to a burbling idle. Only the soulless will be able to resist blipping the throttle once or twice.

On the move, it soon becomes clear that the Vanquish S is set up to be more soft-focus than hardcore. It pulls away smoothly: the re-calibrated transmission changing up at the earliest opportunity thanks to its huge torque reserves.

Aston Martin might speak of faster shift times, but it’s the low-speed refinement that shines to the fore. Attempt anything other than a relaxed acceleration and the transmission shifts through the gears like a heavyweight boxer landing punches. It feels outmoded, especially in light of modern McLaren and Ferrari systems. Right now, the Ferrari 812 Superfast is the best in the business, and the Vanquish S doesn’t come close.

But away from the flawed transmission, the Vanquish S offers almost unrivalled GT cruising capabilities. The suspension is smooth and supple, while the steering is accurate and consistently weighted. The S seems to flow over Britain’s less than perfect roads. 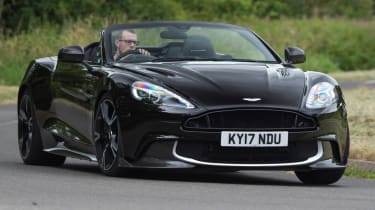 And yet, the latest upgrades have given the S a little more focus. Stick it in Sport or Track mode, and the ride becomes noticeably firmer – arguably too firm in the latter setting. There’s no getting away from the fact that it’s more of a GT than a sports car, but to criticise it for that would be to miss the point.

As you’d expect, there’s a small amount of wobble through the structure of the Volante, but the advantage of lowering the roof is the chance to enjoy the symphony created by the V12 engine and four-exit exhaust.

The three-layer fabric roof is operated electrically and can be lowered on the move, completing the task in just 14 seconds. Once down, refinement remains in tact, with very little in the way of buffeting – even at high speeds. Roof up, there’s just a small amount of wind noise from around the tops of the doors.

Truth be told, neither car is going to offer razor-sharp dynamics or lightning-quick responses. So it all comes down to whether you choose hardtop or convertible. Oh, and the small matter of the additional £12,000 for the Volante.

The 6.0-litre V12 engine might be old one, but it’s still a piece of engineering brilliance. Hats off to Aston Martin for leveraging a little more life from this ageing motor, which has roots in a pair of Ford V6s.

The power delivery is smooth and linear, past 4,000rpm the engine feels alive, with maximum power at 7,000rpm. It comes alive in the mid-range, bellowing and snarling its way to the redline.

Strangely, it never feels as quick as the 3.5 seconds 0-62mph time suggests, but with such a ferocious soundtrack, it hardly seems to matter. Both the Coupe and Volante offer the same sprint time and an identical 201mph top speed. 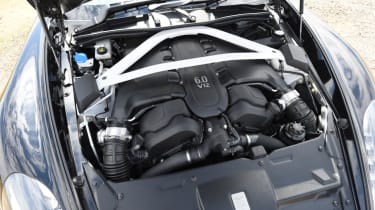 If you’ve spent £200k on an Aston Martin V12, will you care about the running costs? Surely not

Aston Martin claims the Vanquish S will return 21.6mpg on a combined cycle, but you’ll be hard-pressed to achieve this if you explore the V12’s true potential. But you’re hardly going to drive like Miss Daisy in a Vanquish.

The list price of a Vanquish S is more than £200k, while the Volante adds another £12k, but Aston Martin owners rarely settle for standard specification. You can bank on a Vanquish leaving a showroom loaded with some choice options and possibly some dubious personalisation ‘upgrades’ courtesy of Q by Aston Martin.

The non-S model lost around 55 per cent of its value after three years and 30,000 miles, which is a hefty chunk of cash, even if you can afford the initial outlay. We’d expect the S and S Volante to follow suit.

The cabin is showing its age, with some quality issues and a terribly dated infotainment system

Looks are subjective, but few cars offer as much theatre as Aston Martin’s flagship GT car. But there’s no doubt that the Vanquish is beginning to show its age, especially in light of the latest DB11. 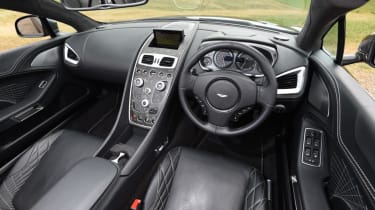 The Vanquish S is distinguished from the standard Vanquish by an aerodynamic package comprising exposed carbon fibre front splitter and rear diffuser. Combined with the quad exhaust outlets, the overall effect is one of more aggression and a sharper exterior.

Not that they’re simply there for show: the aerodynamic upgrades help to reduce lift, which will be comforting if you’re nudging 200mph on a German autobahn.

The results are less successful on the inside, with a cabin that’s beginning to show its age and switchgear that has no right to be included in a £200,000 supercar. The indicator and wiper stalks, for example, feel cheap and a bit nasty.

You can, of course, festoon the interior with any number of upgrades, with everything from coloured seatbelts, contrast stitching, leather headlining, carbon fibre paddle tips and piano black fascia available as options.

But these features will fail to mask what looks and feels like a cabin from another age, especially when viewed alongside the Mercedes-enriched DB11, which will be sharing showroom space with the Vanquish S.

You’ll find better sat-nav and infotainment systems in a supermini costing less than £15,000, which isn’t great in a car selling for more than £200,000. Sure, the Aston’s talents lie elsewhere, but tech and connectivity and becoming increasingly important to today’s new car buyers. 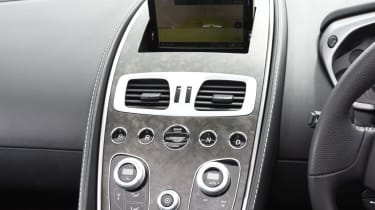 The 6.5-inch screen is too small, while the resolution isn’t sharp enough and the system lacks the usability of more modern systems. On the plus side, the Vanquish S gets Apple CarPlay, while the 1,000-watt Bang & Olufsen audio system is one of the best in the business.

The Vanquish S is described as a 2+2, but only small children will find space in back seats. If you’re after a genuine four-seater GT, take a look at the Bentley Continental GT.

On the flipside, the availability of rear seats does give the Vanquish the edge over a two-seat supercar, even if you only ever use the back bench for additional storage.

The Vanquish S measures 4,730mm end-to-end, and 1,910mm wide (2,067mm including door mirrors), which should make threading this GT through narrow city streets and country lanes a daunting experience.

Front legroom is perfectly adequate, but the high-mounted seats mean that headroom is restricted. It creates a snug cabin, feeling more intimate a Continental GT. 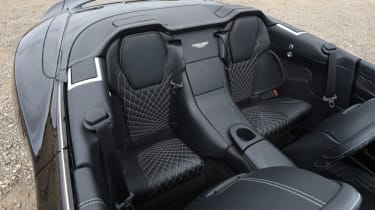 In true grand tourer style, the Vanquish S offers enough practicality for a quick weekend away or a trip to the south of France. The Coupe’s 368-litre boot is large enough for two sets of golf clubs, while the Volante offers 279 litres, whether the roof is up or down.

If the rear seats aren’t required, they can be removed as a no-cost option.

For a luxury brand, Aston Martin doesn’t have the best reputation for reliability, but things are improving. That said, the Vanquish S is an older product and doesn’t benefit from Aston’s recent relationship with Mercedes.

On the plus side, each Vanquish is handbuilt, taking 250 to 300 hours to complete, which provides some reassurance of quality. 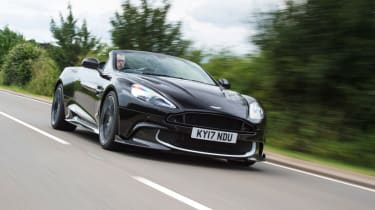 In common with the rest of the Aston Martin range, the Vanquish S is covered by a standard three-year warranty, which can be extended for a further 12 or 24 months. On the Vanquish, the cover is for unlimited mileage and an unlimited amount, up to the value of the car.

A Vanquish will require a service every year or 10,000 miles, with prices starting from £761. 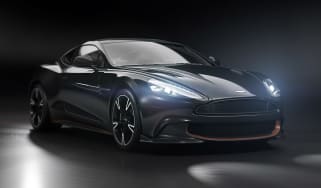 Only 175 Vanquish S Ultimate models will be produced, as Aston Martin waves goodbye to the second-generation GT
Skip to HeaderSkip to Content