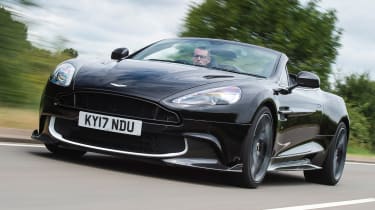 The evolution to S specification for the Aston Martin Vanquish Volante has added even more performance. It’s a machine that simply makes you feel good, led by that glorious V12, stunning styling and a comfortable chassis that delivers more than enough agility but importantly enough for the road. There are a few small issues with quality in places, but this is a brilliantly British take on the soft-top super GT formula.

Aston Martin is entering a new era following its tie-up with Daimler, its incredible Valkyrie hypercar and motorsport-inspired AMR sub-brand variants, but it’s not lost sight of what it does best. That is big GT cars and convertibles, and this Vanquish S Volante is yet another model in a 104-year back catalogue of hits.

Aston has honed this drop-top Vanquish S with engine, chassis and aerodynamic tweaks, so the 6.0-litre V12 now produces a massive 592bhp (up from 565bhp), thanks to a new, freer-breathing intake that helps improve throttle response.

Many performance car manufacturers are turning to turbos (Aston’s doing this itself on some models), but the British firm has kept its big-displacement, normally aspirated V12 in the Vanquish, and the car is all the better for it. 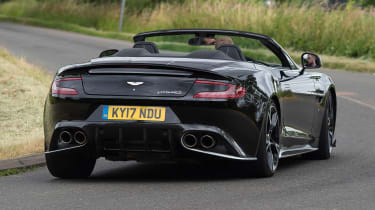 It bellows a rich tone on start-up, snarls through the mid-range and wails at the top end. With maximum power at 7,000rpm and its 630Nm torque peak delivered at 5,500rpm, the engine loves to rev. It’s so smooth for such a big unit and with the roof down, the V12’s chorus is addictive, so you keep the throttle pinned to access more of that noise and the exhilarating hit of acceleration.

However, there are still great gobs of torque in the mid-range, so you can make progress less frenetically by surfing this wave of performance.

Thanks to the recalibrated eight-speed automatic transmission, the Vanquish S Volante will crack 0-62mph in 3.5 seconds. A claimed top speed of 201mph (roof up) is impressive for a convertible, too.

There is no doubt the Vanquish’s performance matches the drama served up by its design, but when it comes to handling this is more of a fast GT than an out-and-out open-top sports car.

The steering has real weight to it compared with a Ferrari California T’s or a Mercedes-AMG GT C Roadster’s, and it’s slower with it. This means the Vanquish feel less alert than these rivals - or more relaxed, if you want to look at it that way.

With the three-layer fabric roof folded down (it’s operated electrically, can work on the move and takes 14 seconds to do its stuff), refinement is good. It’s not too blustery in the cabin, even at faster speeds - and if you do keep the soft-top in place, there’s only a bit of wind whistle from around the doors.

Removing the roof means there is a noticeable but small amount of wobble through the Volante’s structure on a corkscrewing B-road, but it’s liveable and doesn’t affect the dynamics too badly. 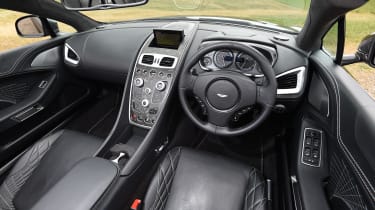 The softer damper mode is nicely tuned for British roads and allows just the right level of vertical body movement to absorb bad surfaces without the body control getting too wayward. Alterations to the dampers and spring rates give the Vanquish a slightly sharper edge in the chassis’ Sport mode, but the difference isn’t quite as pronounced as you might think. That’s a good thing, because even in this more focused setting, it means the Aston doesn’t feel overly firm, and the ride and handling balance aren’t corrupted as a result.

In combination with the aforementioned steering, the eight-speed gearbox adds to the easy, unruffled feel on the move. The box is relaxed and smooth in auto mode and while manual shifts aren’t as quick as the best dual-clutch boxes out there, the Vanquish doesn’t jerk between changes. There’s a nice throttle blip on the way down the ratios, too.

So as long as you don’t drive the Volante expecting it to be a hyper-alert sports car, you won’t be disappointed. This is a big, refined and relaxing convertible grand tourer that boasts electrifying pace and a huge level of character. 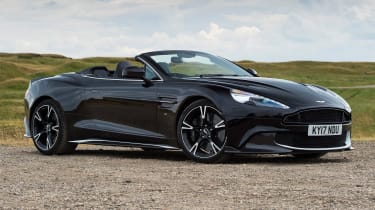 However, at £211,950 there are a few flaws- most notably the infotainment system and its 6.5-inch screen. It gets Apple CarPlay, but the hardware resolution isn’t that sharp and it lacks the usability of more modern systems. However, the Bang & Olufsen stereo is as good in pretty much any GT we’ve tested.

Our car also featured Aston’s £1,995 Chopped Carbon Fibre fascia on the centre console, as well as carbonfibre bonnet vents and a carbonfibre grille (another £1,995 apiece) to go with the carbonfibre aero package comprising a revised front splitter and bigger rear diffuser housing the quad exhausts. It was set off by the £2,995 Club Sport White graphics pack on our test car - which had a hefty price tag with all of its options.

But then, the Vanquish S Volante is a special car that offers exactly what its customers will want. They’re a rarefied group, but it’s easy to see how they’ll be attracted by the V12 engine, supple chassis and a 279-litre boot that’s big enough to swallow a decent amount of luggage. This really is a brilliant convertible GT.