Aston Martin Vanquish Volante V12 unleashed – but is it as good to drive as it looks? 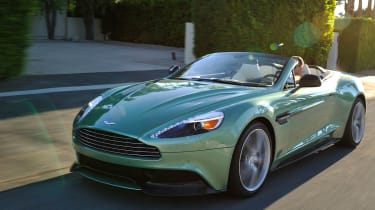 The Aston Martin Vanquish Volante might be Aston’s stiffest convertible ever, but the car is still more about posing prowess than handling finesse. The styling, build quality and that V12 are all top class and it corners well, but you can feel the chassis flexing now and then. If lap times are your priority, save £62,000 and buy the new V12 Vantage S. But if you want to own one of the most elegant cars on the road, this is it.

Cars don’t get any more seductive than an Aston Martin convertible. But while previous models like the DB9 and DB7 Volante had looks to kill, they suffered from poor torsional rigidity. The new Vanquish Volante should be as good to drive as it is to behold, though, as Aston claims it’s the stiffest drop-top it’s ever made.

If looks were everything, the Vanquish Volante would have a valid case for being the best car in the world. With the roof down, its taut carbon-fibre skin (which saves just 3kg compared to aluminium panels) and perfect proportions are a work of art. The sculptural, integrated rear spoiler is carried over from the coupe, and the windscreen flows seamlessly into the hood.

Also taken from the Vanquish coupe is the new One-77-inspired dashboard, complete with pop-up sat-nav and infotainment screen, leather sports seats and touch-sensitive buttons that vibrate on contact. It’s still not the easiest centre console to navigate, but always feels special.

The real surprise, however, is the Volante’s practicality – the 279-litre boot (it’s the same with the roof up or down) is twice as big as the DBS Volante’s and 19 litres bigger than a Bentley Continental GTC’s, and is easily roomy enough for two golf bags. You can always throw some luggage on the back seats, too, when the kids aren’t squashed into them.

Folding away the triple-layered roof takes 14 seconds and refinement is impressive. Unless you’re unusually tall, the windscreen sends the airflow just over your head, and with the windows up and wind deflector erected, you can happily keep the roof down at motorway speeds. With it up, there’s a whistling from around the wing mirrors that can get frustrating.

There’s another benefit to peeling back the roof – you’re treated to the distinctive exhaust note in surround-sound, especially when you hit the glowing red Sport button on the wheel.

The monstrous 565bhp 6.0-litre V12 is the same as the coupe’s, and the big engine’s volume and richness of sound are out of this world.

But even though the Volante covers 0-62mph in 4.1 seconds – the same time as the Vanquish coupe – and hits an identical top speed of 183mph, it never feels mind-bendingly, supercar fast. It definitely has more in common with the effortless performance of a Bentley Continental GT than the savage pace of a front-engined Ferrari.

There are two reasons for this: the 1,844kg kerbweight, which is 105kg more than the coupe’s (thank chassis strengthening for that), and the oddly spaced gear ratios of the six-speed automatic transmission.

In auto mode, the torque converter is faultless, melting the gears together into a single mass of power and torque, but take control with the paddles and the lower gears are simply too long. The huge space between second and third, for example, means that on tight country roads you need to choose between screaming around in second, or sticking in third and sometimes getting bogged down.

Aston Martin claims that fitting a newer eight-speed box would only deliver a two per cent improvement in economy, for an unjustifiable engineering cost, but in our opinion it would make a major difference to the powertrain’s responses.

Spring rates are slightly softer than in the coupe, while the three adaptive damper settings – Normal, Sport and Track – deliver little change in character from mode to mode. Sport is the best compromise, letting the suspension breathe with the road surface, but keeping the body in check.

Still, this is a car that feels more in its element on fast, wide, sweeping bends than threading along narrow country lanes. Throw it into a turn and it clings on well, but you can feel the chassis flexing – especially when you hit a bump mid-corner. The steering is well weighted, though, and the carbon brakes offer superb feel and power.