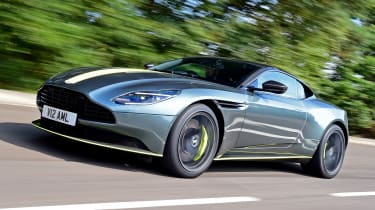 The DB11 AMR is exactly what a big British V12 GT car should be. In fact, it’s what the DB11 should have been from the start. The updates have enhanced its dynamic side without compromising its grand touring credentials. With these changes, the DB11 now feels more at ease with itself and makes more sense in the Aston line-up.

Just 18 months after its launch, Aston Martin has already facelifted its V12-engined DB11 GT car. Is it an admission that the DB11 never quite hit the mark, or a case of continual evolution?

It’s certainly the latter and probably, in truth, a bit of both. The myriad tweaks and changes have resulted in this: the DB11 AMR, the British brand’s third model to wear the Aston Martin Racing tag.

Some of the changes are to the chassis and some are to the powertrain. The former has received know-how and learning from the DB11 V8, with stiffer rear sub-frame bushings, while the damper rates have been firmed up by 10 per cent at both the front and the rear. There’s also a thicker front anti-roll bar to match the improvements to the rear axle. Spring rates stay the same, so it doesn’t lose its fluid, light touch on the road.

It feels good for those numbers, but the real delight is how it delivers its performance. That torque plateaus from 1,500rpm, so there’s urgency low down. It means the AMR catapults you towards the horizon at an alarming rate, with a gratuitous V12 chorus.

That’s thanks to the freer exhaust system that releases a few extra decibels. In the powertrain’s Sport+ setting it growls low down and howls at the top end, with pops and bangs on the overrun that fit with the AMR’s more focused image. It all happens in a way that seems natural and not contrived; the noise truly is befitting of a big Aston.

That mode is one of three for the powertrain, while the chassis side gets the same choice of GT, Sport and Sport+ for the adaptive dampers. In the first of those settings – and even on 20-inch wheels – the ride is expertly judged. It has compliance, absorbent quality and flows with the road, keeping the tyre in contact with tarmac to maintain grip.

Sport reduces roll but hampers the AMR’s ride quality. Sport+ heightens this further to the point that, on the road, it’s not necessary. 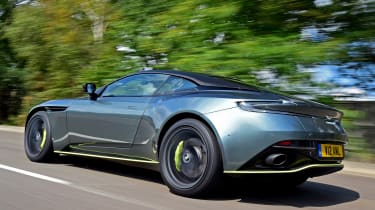 Thankfully, the steering weight is the same in all three modes: just perfect. It’s also matched by the speed of the rack, as the Aston’s wheelbase, limited-slip diff and chassis setup all combine to deliver beautiful balance. That’s subtle adjustability if you want it, or easy, sweet slides where appropriate. You can sense the alterations underneath as the connection to each axle through the chassis and the throttle is delivered in granular detail.

There are some flaws to the package though. Despite some software updates for the gearbox, in Sport+ the shifts are occasionally jerky. It’s a fine and easy automatic when left to its own devices.

Starting from £174,995 quality in one or two areas might not be what you’d expect, but the DB11’s leather-lined cabin is, on the whole, well trimmed. The driving position is great, putting you deep in the heart of the car, so you feel it move around you. Visibility isn’t great, but then that’s the price you pay for the arresting styling. 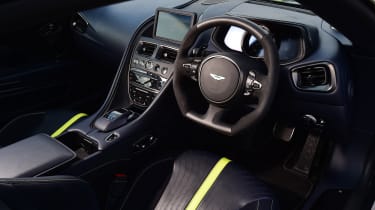 The car in our pictures is a Signature Edition (£201,995), which features more exterior carbon, a Stirling Green livery, and some bright lime accents. Complete with 20-inch alloys, it won’t be to everyone’s tastes, but the DB11 AMR has certainly earned its stripes – and looks more visually menacing.

Much of this is unchanged, but together the subtle extra aggression and the dynamic changes Aston has unearthed and polished what was always present at the core of the DB11 – a lovely car waiting to be unlocked.