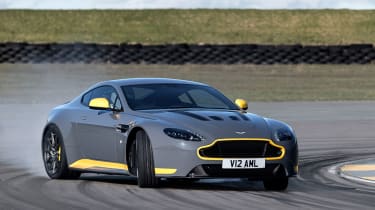 Aston Martin claims this refreshed V12 Vantage S is the model to satisfy performance car purists, as it’s available with a manual gearbox for the first time.

The new seven-speed unit is being offered as a no-cost option on the coupe and Roadster versions of the sports car, which also get a string of interior and exterior tweaks to justify the ‘2017 model year’ tag. The 6.0-litre V12 engine remains unchanged with 563bhp – enough to take the coupe from 0-62mph in 3.9 seconds, regardless of whether you specify the new manual box or Aston’s Sportshift automatic.

The V12’s manual has a dog-leg first – a similar layout to those used in motorsport, where that gear is only used for starts. In addition, the gearbox features AMSHIFT, Aston’s electronic set-up that blips the throttle automatically on downshifts and, unusually, facilitates full-throttle upshifts for maximum acceleration. 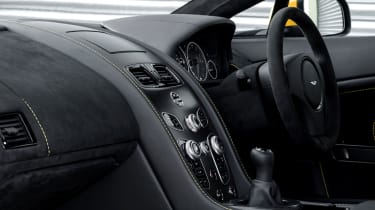 The V12 Vantage gets a new optional Sport Plus Pack, which brings five different body colours and contrasting accents on elements like the grille surround, door mirror caps and side sills. Ten-spoke graphite alloys and a choice of black or grey upholstery are also included as part of the Sport Plus package.

The V12 and its baby brother, the V8 Vantage, get a much needed upgrade to their infotainment systems, too. The new AMi III set-up incorporates Apple CarPlay and includes a faster processor for quicker route planning on the built-in sat-nav. 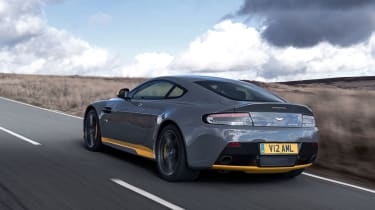 The new models will go on sale in the summer, with first deliveries of the V12 Vantage S in autumn. Prices should remain broadly unchanged, with a standard edition of the coupe costing around £140,000.

"Broadening the scope of the V12 Vantage S with a manual transmission option is an indication of our desire to offer the keenest drivers a more analogue and immersive machine to enjoy“, said Aston Martin CEO Dr Andy Palmer. “I’d like to take this opportunity to reiterate that the manual gearbox remains an integral part of our product plans and will do for many years to come."